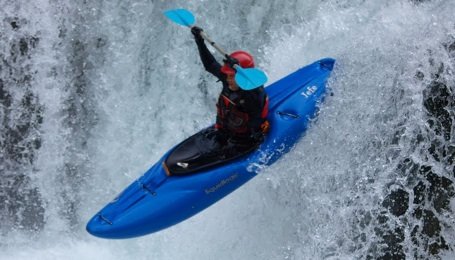 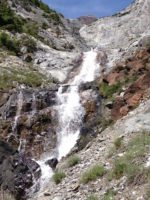 “The river has an ending, but it does not end. It has a beginning, but it never began.”  (from the blog of Ricky Gnarsky)

Above mountains and under clouds a Chilean condor soars, his broad wings—three full meters from tip to tip—catching the wind. He almost never flaps those great wings, but lifts instead a single finger-feather and angles his tail and turns into a rising current of air and rises with it, now diving to gain speed, now rising again in a long, slow spiral above a tiny lake nestled in the midst of snow-capped Andean peaks. Along the banks of this lake, a few stunted and tough Pehuen trees stretch their spiky trunks upward, their umbrella-curved branches surviving the high altitude, the cold winds on which the condor rides, and the harsh winter snow that even now in mid-summer clings on in the shadows. Huemul deer and wild vicuna come to this lake to drink their last water. The mountain puma hunts its rocky shoreline. Good feeding here for this old, solitary buzzard.

Chilean condors mate for life, and many years ago this one’s mate ate poisoned goat in the valley far below toward the coast. He himself hadn’t eaten that day, troubled by the human smell on the meat. He’d lifted off on his huge wings, flapping noisily, thinking she would follow. But her hunger overcame her. He’d circled for two days over the field, long after he could smell her death, waiting for her to rise and join him, but she never did. After that, he retreated to this high cordillera of the Andes to wait out the long years of his life. He was fifty then and nears eighty now, perhaps the oldest living bird of his kind, and one of the last. The condor knows nothing of extinction, but he knows he seldom sees another like himself. The great gatherings he participated in as a young bird—fifty or more condors joyfully circling together in silent congregation—are no more. Now he always flies alone, often haunting this same piece of sky above this unnamed lake, his still-sharp eyes scanning the earth for death.

To the south, the condor can see Volcan Villarrica fuming against the sky, a perfect pyramid of white with a sharp line marking its crater summit, its missing capstone. A thin pillar of bluish smoke rises from the crater and is swept away by the wind. He flew above that smoking crater many years before, but the rising fumes were noxious and drove him away. He has no urge to return.

To the north and east the high snow peaks of the Andes and their deep glaciers feed the unnamed lake this condor circles, bleeding downward a little of their water throughout the hot summer, hoarding new snow every winter. Out-flowing from the lake’s southwestern lip, a tiny stream slips along rocks, over ancient polished pebbles mixed with still-jagged pumice and lava stones from more recent eruptions. The stream meanders at first through a high meadow, uncertain, but flowing generally westward, as if sensing in the far distance its ultimate goal, the Pacific Ocean. The condor could see the ocean, or at least the ocean’s morning shroud of dense fog, only a hundred kilometers away, could fly there before noon if he chose to do so. But he no longer has the urge to leave his mountain retreat. The fresh-born rivulet, however, wants nothing else but to move toward that distant salty call, both its source and its grave. (The life cycle of water, after all, being a perfect circle.) Fed by side-streams and secret springs, the stream swells to creek size, straightens as the slope gets steeper, gains power, and somewhere along a deep, isolated canyon takes on the human name, Rio Profundo.

The river was assigned that name by a Padre Juan Bautista, in 1575, a Spanish priest who roamed up into the southern Andes looking for native villagers to convert to Catholicism. After the squad of conquistadors he accompanied—themselves in search of gold, not souls—were killed to a man by a Mapuche ambush, Padre Bautista wandered alone through the mountains, pursuing his mission. But not speaking the local language and unwilling to learn even a syllable of “that devil’s tongue,” he had little luck at conversion. The Machi of the Mapuche-Pehuenche—people of the land and of the Pehuen tree— watched him kneeling to pray, drawing constantly in his notebooks, playing with his rosary, and reading aloud words no one could understand from that black book. She found his antics hilarious and deemed him insane but harmless. And recognizing that insanity may be only a mask for holiness, she ordered the people to cause him no harm. Occasionally, when he seemed near to starvation, kind women would leave him gifts of roasted Pehuen nuts and llama jerky in the night. Teased by children, ignored by everyone else he encountered, the Padre fled the territory shortly after the Valdivia earthquake of 1575, leaving not a single convert nor any monument to his Lord behind.

But Padre Bautista left his mark on the land in another way, by naming a number of local landscape features including this river and its accompanying waterfall—which he marked vaguely near the source of the river—Salto Profundo. When he returned to Santiago, destitute and having failed as a missionary, he sought to make a living as a cartographer of the Mapuche nation through which he had traveled. His artistic though sometimes wildly inaccurate maps formed the basis of the first official mappings of the region. Padre Bautista’s Mappa Mundi, the great undertaking of his late life, hangs in the Cathedral of Santiago to this day. And so the name Rio Profundo endured, and has been dutifully passed along to every map that followed, even while the river’s course has altered and its flow has risen and fallen with changes in the glaciers above. The Profundo drops steeply down its short, twenty kilometer length, narrow and inaccessible after the paved road ends at the Tres Saltos—three three-meter waterfalls in close succession—just above the confluence where it loses its own identity into the larger Rio Liucura, which itself joins the Rio Trancura and then disappears into Lago Villarrica in just a few kilometers more.

But all these human names, this history, the earthquakes and geologic changes in river flows, these conquests and defeats—none of them matter to the old condor, who thinks of nothing but air and sky and the smell of meat. His nose, unlike that of his distantly-related North American namesake, is sharper even than his eyes. It can detect an individual molecule, recognize it, and gauge the direction from which it came. He has retreated here to escape the world of people, all that human stench, and is even now troubled by the smell of diesel fuel and by a sound drifting up the river valley to his high hermitage—the harsh, high-pitched whining of a Toyota engine and squealing tires. Disturbed, his meditations interrupted, the old condor angles away, winging off to the east, toward the still higher peaks, the silent, sublime altitudes to which he is the only living witness, leaving our story behind.