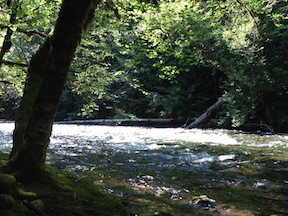 like an old song running through my head.
The sky in its slip and sleeveless gown
this evening. My first chance in days
to sit alone. A mute crow
watching me work. The way its eyes
flick sideways with a jerk, until
it disappears. Now the night

gathers like water in the sky,
like memory collecting in the folds
of the brain. The sky full of dark thoughts.
My head aches. The song like a radio
that won’t go off. The moon,
old evil eye, about to rise. And ghosts
of mist already gathering under the trees

whose exhalations are my breath, whose leaves
flicker like green flames in the wind,
half in, half out of shadow, caught
between this world and the next,
what surrounds us, like the stream
which holds some floating fish
suspended, flapping their tails

just enough to stay motionless in the water.
I can’t take my eyes off them,
as the sky darkens and they disappear
without going anywhere. I stand up
under the hidden moon to go home,
an old song still running through my head.