An Open Letter to the Leadership of the Democratic Party 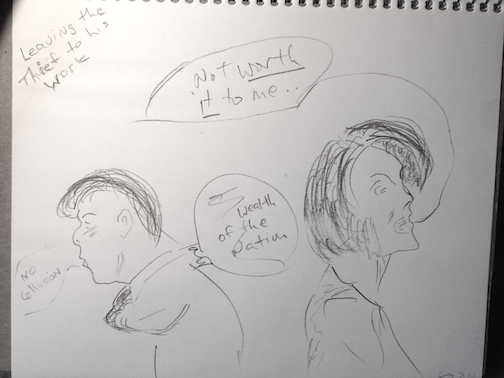 To the Democrat Party Leadership–

After 44 years as a registered Democrat, I have left the party. I am now an unaffiliated voter.

Nancy Pelosi’s statement that impeaching a clearly criminal president “isn’t worth it” has pushed me out. I cannot in good conscience consider myself a member of a political party that tolerates that kind of thinking in its leaders. To not impeach at this point is a complete dereliction of duty, the duty outlined in Section 4 of Article 2 of the constitution. No one else except the Democrats in the House can do it. Pelosi’s statement condemns the country to suffer two more years under the rule of a criminal. (or likely 6 more years!)

It’s simply immoral to knowingly allow a criminal to remain in office, enriching himself and his family and his cronies, endangering our country and the whole planet. Even if you can’t win, moral duty says you must attempt to stop the crime. This situation is exactly why the impeachment clause is in the constitution. To not use it is somewhere between appeasement and aiding and abetting. I can’t be a party to it.

I’m certain, too, that impeachment is the correct move “politically”. Here’s a prediction. If the Democrats don’t impeach, they will lose the 2020 election. All arguments about the political effect of impeachment are simply guesswork. I hope I’m wrong, but I don’t think so. People like parties that represent political strength, not weakness. People are attracted to action, to effort, to courage of convictions. To cry out “Treason, crime, treason… but we won’t impeach.” just sounds like a lie. The fact that the Democrats haven’t impeached will become the Republican’s best weapon. Even losing an impeachment fight will give you more chance to win in 2020.

Not impeaching is wrong in all ways. I won’t be a party to it. So I’m no longer in the Democrat party.

The Democratic party has a proud history, and I’m proud to have been a member of it in the past. If the Congressional Democrats move forward with impeachment, with or without the dubious leadership of Nancy Pelosi, I will consider re-registering as a Democrat.

Until then I will continue to argue for impeachment, not as a Democrat, but as a citizen whose party has failed him.

And I will continue to encourage others to see that failure in the current direction of the Democratic party. If I can talk others into leaving the party, I will. There may be other parties that show strength and moral courage, other parties to earn my vote.

It’s with great sorrow that I write these words. I’ve been a Democrat most of my life, and I hope, someday, to be proud of the Democratic party again,