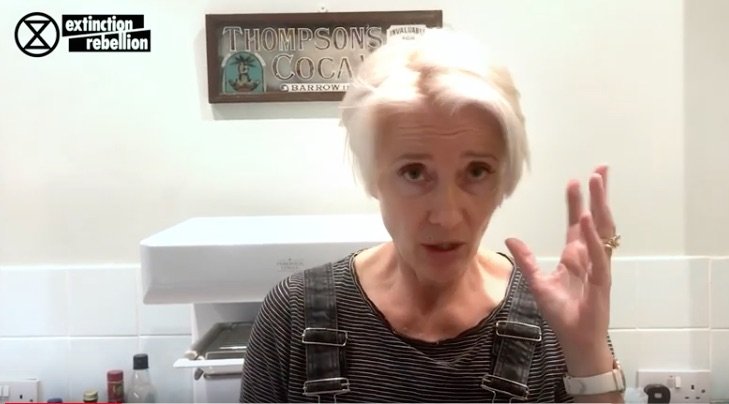 In my dream, I had a weird dream: I was watching myself watch a circus on TV. The center ring was filled with clowns, chasing each other in a figure-eight. Blue clowns led by Nancy Pelosi waving subpoenas stumbled along after Red clowns led by a plodding but determined William Barr waving indictments. They followed each other in an endless loop, never catching up with the other side. From high up in the bleachers, the figure eight they were making looked like an infinity sign.

The dream seemed to last forever.

When I woke up, I saw that the circus tent is still burning down around me. And the audience is beginning to get a little restless.

Along with the growing Student Strike for Climate, Extinction Rebellion is getting some attention in Europe, if not in the US. And why not? Not only is the environmental crisis the greatest threat to our future, but Emma Thompson is in on the rebellion, too. Am I dreaming?

I often take it for granted that my readers know that the climate crisis is real, and that it’s hurting us already. In case you were wondering why I think so, check out the extreme weather breaking out, well, everywhere. Floods in Oregon, floods in the Midwest. A spring blizzard in Minnesota. Tornadoes in the South. But maybe you think climate change doesn’t affect our weather now. Here’s a place to start finding out.

As Jay Inslee pointed out so clearly in his recent CNN Townhall, the environmental crisis affects many other issues. For example, many of us, including Republicans, are concerned about immigration issues. Climate change is already making those problems worse.

Trump is the Denier in Chief, of course, and so the greatest impediment to change. The conservative wing of the Democratic Party seems to think two more years of business as usual in the burning circus tent is fine. But impeachment is still in the air, and even, on rare occasions, in the news.

Impeachment Blowing in the Wind.

Vanity Fair describes the Kafka-esque situation Pelosi has trapped the Democrats in. Can’t impeach without evidence which you can’t get unless you impeach.

Even 538 gets in on the action, though they don’t give high odds for impeachment
https://fivethirtyeight.com/features/obstruction-of-justice-could-still-threaten-trump-politically/

As the blacking out of the Mueller report goes on slowly, the focus in the center ring of the Congressional Circus has turned to the quest for the holy grail of Trump’s tax returns. This makes sense. After all, Al Capone was brought down by taxes. But the Democrats, as usual, are just clowning around with serious business.

The Democrats in Congress have written a new letter to the IRS giving them 10 more days to comply with the law. How’s that for decisive action? Neal “expects a reply”, um, or what? Then, I suppose, he’ll actually use the subpoena power he is not using now because… This whole charade about tax returns is a done deal. Spoiler alert. This will go to the Supreme Court whose politics will override the law. But not until after the 2020 election.

In an amazing act of defining something by its definition, Neal’s letter states firmly,

So apparently, if the IRS denies his request, Neal will interpret that denial as a denial of his request. Fookin’ brilliant!

This sort of smoke cannon approach to the clown wars makes me glad I’m standing to the side. I can only wonder what these smoke screens are covering up. And my view on impeachment remains the same. Without impeachment in process, every action the Democrats take is just for show.

From the side it looks like it’s time to impeach, or choose to lose.