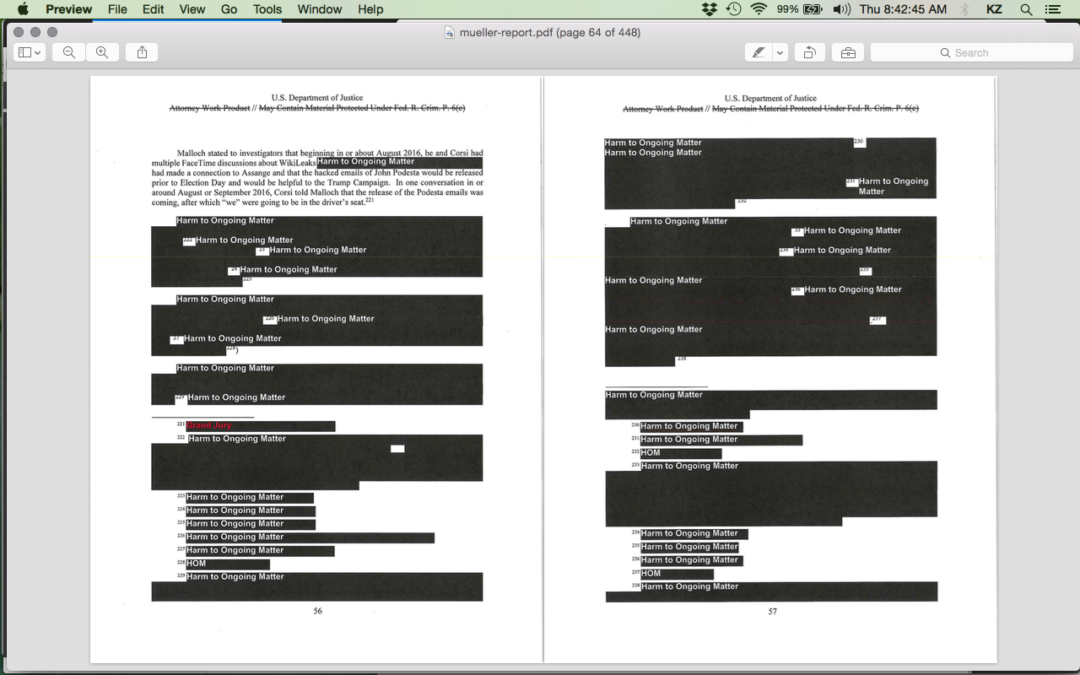 “I washed my brai-ain, in the new-ews cycle. I shrunk my mind, in the media spin.”

The Mueller report, in all its redacted glory, has been released to the public. The two-party circus is going mad, all the clowns shrieking and clawing the air, as 448 pages of confetti (much of it blacked out) rains down on the crowd in the bleachers. All the other rings have gone dark, as every spotlight in the arena trains itself on the clown war taking place in the center ring. Elephants are trumpeting, and donkeys are braying in ear-splitting competition. We clutch the arms of our seats, expecting fireworks to begin erupting any minute.

But I’ve got my copy of Mueller’s report, too, and I’ll dig into it as best I can. Piecing together the confetti. Look for some commentary here tomorrow. My View from the Side is that I shouldn’t talk much about it until I’ve given it a fair reading. Many news websites are posting live analyses as they dig through this epic tome. My favorite reader so far is from Slate, where Ben Mathis-Lilley has already discovered some pithy passages.

Slate also has a good article from yesterday about the Democratic Party conservative establishment’s efforts to “Stop Bernie” (and other progressives).

Outside the circus tent of Washington D.C. the biggest news not reported on in the USA is the ongoing Extinction Rebellion in the UK. Protests in London continue for the fourth day in a row. Over 400 arrests have been made. You need to search Google News to find good information about this dramatic and long protest.

The British news, of course, is full of stories if you want to see what a peaceful rebellion might look like.
https://news.google.com/search?q=Extinction%20Rebellion%20London&hl=en-US&gl=US&ceid=US%3Aen

Here’s one American take on the story, this from Fox. It looks like cops treat protestors a bit differently in the UK. #bestcopsever

Also continuing for the fourth day is the cycle of extreme storms with tornadoes striking the southern states. In the same way that any individual cancer is difficult to link to smoking, any given storm can’t really be linked to climate change. But looked at from a longer view, the overall increase in storms fits with the models of extreme climate disruption. Over the long term, it looks like we are in for quite a ride. I don’t think we’re in Kansas anymore. And neither are the tornadoes.

Trapped inside the spinning whirlwind of the news cycle, it’s hard to take any view longer than a day or two. I think this inability to consider the long view is one of the great failures of our two-party system. The media, of course, feeds into our constantly shortening collective attention span. Short-term thinking is quite literally our downfall, since great historical issues like the current environmental catastrophe can’t be seen by short-sighted vision. Today’s view from the side is a short one. I’ve got some reading to do! Tomorrow, on Friday for Future, I’ll take the longer view. I’m looking forward to looking over the Mueller report and seeing what I see— from the side.