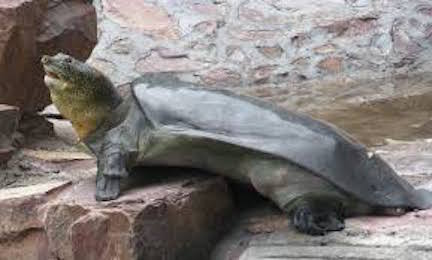 Impeachment Back in View

“If you can’t have fun whilst saving the planet, what’s the point?” Emma Thompson

Some years ago I read the book The Sixth Extinction by Elizabeth Kolbert. The information in that book underlies all the ideas and attitudes I express about the environmental crisis in this series of posts I call View from the Side. Today, I want to start with the sad recognition that another species has gone “functionally” extinct. Goodbye to the Yangtze Giant Soft Shell Turtle. I’ll miss you forever, even though I never knew you.

As many as 200 species go extinct every day due to human activity. It’s worth remembering that, as we argue and pontificate about reports and redactions and the circus of two-party politics in the USA.

In other Friday for Future news, the Extinction Rebellion continues. In London, after four days of fairly genteel relations between the protestors and cops, the Extinction Rebellion is finally getting the truly mass arrests they were looking for. Joined by Emma Thompson (Dame Emma Thompson to you) the rebellion in its fifth day in London. Here’s a quick glance from BBC. You will need to search the American news to find out more.

And on to impeachment!

For anyone new to this blog, it’s worth mentioning that it was originally inspired by my leaving the Democratic party recently in outrage over Nancy Pelosi’s snide dismissal of impeachment. My reasons for leaving the party are many, and have been building for a long time. But the rejection by Pelosi of impeaching an obviously criminal president was the last straw, my tipping point. Impeachment is obvious, necessary, and morally correct. The day she said Trump isn’t “worth it” I changed my registration, left the Democrats to become an independent progressive voter, and started this blog from the side with an open letter to the Democratic Party leadership explaining my reasons.

Now, we see the second most powerful Democrat in the House doesn’t want impeachment either, even after the revelations of the just-released redacted version of the Mueller report. Idiot! Oh, wait, I don’t talk like that on this blog. This blog is a place for reasonable discussion (and unreasonable metaphors!) Perhaps the honorable Representative Hoyer could pull his head out of his honorable rectum long enough to at least read the report before he begins farting out this nonsense. Is that reasonable enough? He reminds me why I’m not a member of his party.

Despite Hoyer and Pelosi’s cowardice on impeachment, the article points out that this line from the Mueller report actually suggests an impeachment is not just reasonable, but needed.

“The conclusion that Congress may apply the obstruction laws to the President’s corrupt exercise of the powers of office accords with our constitutional system of checks and balances and the principle that no person is above the law.”

So “the president’s corrupt exercise of the powers of office” isn’t “worth it”? Then, what is? If I could quit the Democrats again, I do it!

James Clapper, on a CNN report, says Mueller “lays out a roadmap” for impeachment. But Clapper— deep state drone that he is— like Nancy Pelosi thinks impeachment is “divisive”. Idiot! Oh, I keep forgetting. I don’t talk like that on this blog. Notice that Hoyer’s “not worthwhile” almost exactly echoes Pelosi’s quote “not worth it” while Clapper’s “divisive” similarly quotes Pelosi’s earlier use of the word. Unified talking points like that imply a coordinated effort. Or else these pundits and politicians just echo each other like parrots.

From Clapper’s reading of the report, it sounds like Don Trump Jr. got off in Mueller’s view because of “ignorance of the law.” I’m no lawyer, but cops have told me my whole life that ignorance of the law is no excuse. Next time I get a ticket, I’ll try this argument, citing the younger Don as my precedent.

There’s an election, both Clapper and Hoyer say, in “18 months”. Again, they use the exact same language. Political spinners should really be more careful in their word choices. They don’t count the two more months after the election before inauguration. So, there’s only 20 more months of a criminal president. If the Dems win in 2020. That’s nearly two years, the length of Hoyer’s congressional term. And what happens to us if they lose, as seems more and more likely?

If I were a Republican, I’d be licking my chops. Every time the Democrats try to vilify Trump during the campaign, his defenders will just sneer, “If he is that bad, why didn’t you impeach him?”

If I were a young Democratic congressperson, I’d be thinking seriously of taking Pelosi, Hoyer, and all their ilk to task in a big way. Or leaving the party now.

So it’s good to see AOC signing on to the impeachment bill put forward by Rashida Tlaib and Al Green.

I admire a lot of the young Democrats and a few of the old. If only the cautious old guard pseudo-progressives like Peter DeFazio would join this impeachment movement it might be able to move.

Nadler doesn’t rule out impeachment, but he dares not take a side.

It’s also a bit reassuring to see that other progressive writers are starting to share the view of this blog that refusing to impeach is morally and tactically wrong. Cowardice, I’d say, is an accurate word to use. Or self-interest. I’d encourage progressives to leave the Democratic party if they are still a part of it. A wave of people leaving the party might have a stronger effect on the leadership than outraged tweets. But that’s just a thought. Inside the party or on the side, it’s good to see these voices calling out for impeachment.

Finally, though, I’m afraid there’s little hope for the Democrats in the near future.The party hacks like Pelosi and Hoyer have their bread buttered by the same knife that Trump uses. They have too much to lose by shaking the golden cage they are in. Until these conservative Democrats move out or are forced out, the progressives will continue to be made voiceless within their party.

The Democratic Party, the USA, and the whole world are heading like a herd of lemmings for a cliff. Call it the Extinction Edge. And there’s not a lot of time to change course.

Apparently, the dumbing down of America has extended to the leadership of the Democratic Party. Dumbing down used to be a problem that intellectuals on the “left” were worried about. Now even the so called “right” is becoming concerned, at least the intellectual conservatives of the Heritage Foundation. This would seem funny, if it weren’t so sad, coming from the party of climate change deniers. Who’s dumb and who’s dumber?

As a lifetime teacher and a technology developer in education, this question of social dumbing down has been of interest to me for a long time. No doubt there are powerful mental changes that new technologies along with over-stressed schools are causing. No doubt illiteracy and anti-intellectualism are growing. Don Trump is the perfect role model for this dumbing down. But I wonder how many supporters of the Heritage Foundation would want to offer more funding to make our schools more effective?

Despite my own concerns about this issue, I’ve never quite been convinced that the younger generation is dumbed down. I think they just don’t know the things we older folks expect them to know. I notice the authors of this survey focus on knowledge of government structure and process, old school civics. They don’t ask how literate the students are about, say, climate change. For example. They might be surprised.

Looking from the side, I’m often most interested in what isn’t there, what’s missing from the picture. The bias of a news outlet, for example, is often seen most clearly in what it doesn’t report. Here are a few statistical details about what is missing from the public version of the Mueller report. A little less than 10% was blacked out. Not that much, maybe, but a higher percentage than the missing 18 minutes from Nixon’s Watergate tapes. You know, just saying.

*** Late afternoon add-on. Elizabeth Warren has come out for impeachment! The tide may be turning.

And if you want to help push for impeachment, here’s one way you can do it. Tom Steyer’s group continues to push hard for Congress to do the right thing.