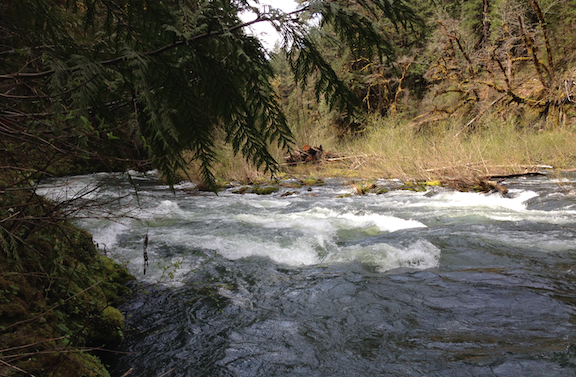 That Damn Problem of Dams

It’s Earth Day, and from the side, I want to look a little closer to home, at my own home water, my home river, the Willamette.

In the Oregonian today I see that the Willamette has been named one of the most endangered rivers in the nation. This breaks my heart.

I learned to fly fish on the upper stretch of the North Fork of the Willamette. I’ve drunk from the springs that feed it. I’ve swum in and kayaked and rafted and fished its waters for nearly forty years, now. But I’ve also seen its darker side. The reservoirs on the Coast fork are polluted with mercury and other toxins. Eat the fish at your own risk. The Middle fork has been blocked for salmon since I’ve been here. The dam at Lookout Point is not passable for fish.

One of the thorniest issues in creating a sustainable Northwest is that of dams. CO2-free electricity from hydro-power is certainly a plus in terms of climate change. When I moved to Oregon, one of the appeals was the “clean” (so I thought at the time) energy from hydro.

And the dams provide flood control, which is a crucial element in the farming systems and living locations that have grown along the length of the fertile flood plain of the Willamette Valley. We’ve adapted our society, in other words, to an environment with dammed rivers. And we’ll have to adapt again, to take them out.

Getting rid of the dams on the Willamette will be a big deal. Like major surgery big. Like a complete change of life-style for the Willamette Valley big. But luckily it’s possible to make those changes in stages. Some dams can be re-designed. Others can be removed. This will take a lot of work. But, also luckily, that work can be good for the economy, creating jobs and opportunities for different businesses.

It will take money, the dedicated direction of our society. It will create some hardship. it will require change.

But we have to do it, so we might as well get busy.

The ecosystem of Earth is suffering, possibly dying right around us. And the ecosystem is literally our life-support system. We can’t live without it. Dams on rivers are one of the ecologically destructive parts of our society that we have to change if we hope to revive that endangered system.

The dams block the natural movement of fish, which are crucial parts of the living system of the river. Anadromous fish carry essential nutrients from the ocean back upstream to the mountain forests. The salmon are a food source for bears and many other creatures, including themselves. Without them, the upper parts of the watershed become depleted of nutrients. The forests can’t grow as well. The diversity of species diminishes.

I’m making all this up a little, based only on my own observations and few nature documentaries I’ve watched, a few books I’ve read. I don’t know the science of this in great detail. I would like real ecologists to prove me wrong, and say that we can keep dams and our forests as well. But I don’t think so.

By simple analogy, it’s obvious. If we look at the earth as a body, the dams are precisely like clogged arteries. They prevent the free flow of the earth’s blood stream— the rivers— and the nutrient/waste cycles that lifeblood carries through the whole body, from the mountains to the sea and back again.

If we see the earth as a body, and study it from that perspective, it’s not hard to see why our society creates the environmental problems it does.

Instead of being a destructive growth on the body of the earth, humans have to find a sustainable relationship within that body. In doing so, we might even find that we are, in fact, a part of that body, and we have a function within it. If humans can see the Earth as a whole, perhaps we can find our purpose as part of a whole.

Opinion of a Parent
https://www.oregonlive.com/opinion/2019/04/opinion-a-parents-pledge-to-fight-global-warming.html

A similar metaphor can be applied to the body politic: Is impeachment a necessary operation to restore the health of the nation? You already know what I think.

It’s not an over-statement to say this is a defining historical moment for our country and our constitution. The Democratic Party leadership, in private conference call today, have a serious choice to make, and I hope they take their oath to the constitution seriously as they make that choice.

It’s not an over-statement to say that the heart of their party, and likely the heart of America, rests in their hands.

I favor impeachment, but I don’t take it lightly, anymore than we should take serious heart surgery lightly. There are always dangers. But when that necessary time arrives, when the danger is this great, to not act is more than foolish. Inaction can be much more dangerous than action.

Our mother country, is at such a point of danger now— as is our grandmother Earth. An operation is necessary to save the country, even though that operation has its dangers, even though it might fail. Without it, failure is certain. That operation, the impeachment of Donald Trump, will only be a first step toward the larger life-style change that will lead to protecting the future of grandmother Earth.

Here’s a historian’s view on impeachment.

Here’s a CNN discussion on the issue. It’s a little hard to watch the well-rehearsed smirks on the faces of the two conservative commentators. But most of the panelists think impeachment is likely.

It’s Earth Day, and I’m heading outside. So that’s all from the side for today.

Addendum 4/23: I seldom link to Washington Post stories because they are protected by a paywall. But the headline of this morning’s column was irresistible. It almost sounds like they are reading View from the Side. 🙂

Pelosi’s Impeachment Dam Has Been Breached