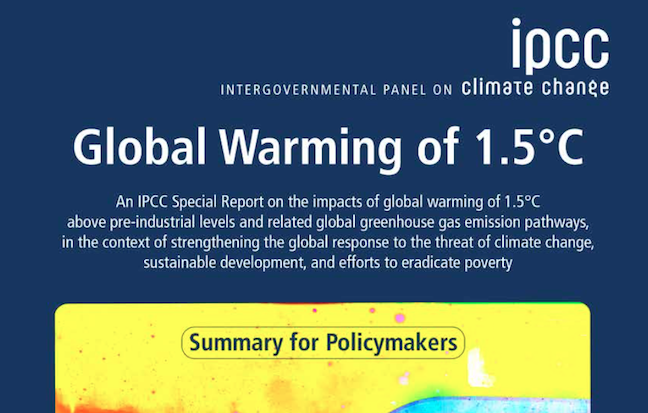 Why Be A Climate Voter?

Donald Trump’s criminal presidency is a stain on the nation. It has to be cleaned up quickly, before it sets and ruins the fabric forever. And Donald Trump is the greatest danger to progress on the environment that we face.

On to the links!

Now here’s someone talking my language. Powerful attack on Pelosi and her corporate in-crowd.

And speaking of the corporate Democratic in-crowd (as I hinted yesterday’s View) from the side it looks like just about time for HRC to make her heroic re-entry into the scene. And of course, she’s conservative on impeachment. She’s a corporate Democrat, after all. And the corporations that pull her strings are the same ones that pull Pelosi’s and Trump’s, too. The last thing the corporations want is “divisiveness”. My guess is Clinton will jump in to the presidential race, not yet but soon, “recruited” so to speak, to solve the chaos of a crowded Democratic field. I sure hope I’m wrong on this one.

And it looks like she and George Conway (who previously called for Trump’s impeachment) have a thing going on. I told you Republicans and conservative Democrats can get along fine. Given Kellyanne’s thing for Trump, I guess this match is made… well, not in heaven but somewhere.

And, to keep on the theme of retro-corporate-throwback candidates. Here comes Biden. “Oh no, Joe, don’t go!” I’ve been chanting over here from the side for a while. Too late now. He’s done gone and done it.

Impeachment will have to wait until Congress returns from recess. The View from the Side has realized that Congress goes on recess for the same reason that kids in kindergarten do. To give the adults a needed sanity break. The Two-Party Circus will resume next week, and we can expect the Clown Wars to escalate.

Meanwhile, the Mueller report continues to deliver the dirt. Does Russia have leverage on Trump? Sounds to me like Bloomberg is asking a rhetorical question. Does the proverbial Bear do its proverbial business in the woods? Or is it in the White House? (Perhaps the truth lies underneath one of the many redactions in Volume 1 of Mueller’s report. pg 111 for example?)

Back in January, long before the Mueller report was released, California Rep. Brad Sherman favored impeachment. This January interview with Vox seems more timely than ever. Just in case you think Mueller isn’t enough to impeach.

This series has been dedicated to that idea since its beginning. I’ve made a personal pledge not to vote for any candidate in any election who does not acknowledge and prioritize the environmental crisis in their platform. But I don’t know that I’ve explained well enough why I’m so inflexible on that idea.

So why am I a climate voter? I’ve known about climate change for many, many years, and I’ve made many of my own life choices based on that knowledge. But, this last year, I decided to review the most recent climate science. I wanted to catch up a bit. And what I learned was shocking. Climate change is not a problem for the future. Nor is it an issue to worry about just a little. The most recent science says that climate catastrophe is already upon us. And absolute disaster looms, if we don’t act now. This new research has spurred me toward the work I’m doing now. I’m a climate voter because I’ve come to believe the environmental crisis is a life-or-death situation for humanity, for my children and grandchildren, and for all the species on this earth.

I’m a climate voter because it is the biggest single issue of my lifetime. The environmental crisis is our World War, it is our asteroid collision, it is the epic event of this epoch of humanity, the single greatest threat to human extinction since the eruption of Mount Toba 75,000 years ago almost wiped out humanity. That is how grave the threat is that science now tells us we are facing. Existential. Life or death. Extinction level event. Whatever words you choose, they mean the same thing. The science tells us we’re in deep, deep trouble, if we don’t do something major, and soon.

Here are just a few very recent articles, if you want to learn more about the climate crisis.

It’s probably best to start with the IPCC Report from October 2018. That report, despite being a cautious and incomplete recitation of the dangers we face, was grim enough to begin waking up the sleeping world to the dark morning we are in.

According to that somewhat conservative report, unless CO2 emissions are cut radically by 2030 the Earth is virtually guaranteed to experience a 3-5 degree Celsius rise in average temperature by 2100. And that amount of change will be utterly catastrophic to human society and to a vast number of species and ecosystems on earth.

But, crucially, the IPCC report does not include the potential feedback loops that could take climate change out of human control.

Nor does the IPCC take fully into account the effect of melting glaciers.

Some people have asked me, “Why focus on nature when there is so much human injustice in the world. Climate is only one issue among many.” But, to me, the environmental crisis overshadows and encompasses all the other social issues we face. Social justice, immigration, poverty are not disconnected from the natural world. Climate change affects the poor more quickly than the rich. Inequalities are already growing in the world due to climate change. Climate change is a social justice problem.

If you want to see news in the American press about climate change, you need to search a little. But it’s there. Type “climate change” into Google News search if you want to get more informed than the front pages will let you.

Here’s a New Yorker piece on Greta Thunberg. I sure wish that amazing girl would visit America.

New York Times hides behind a paywall, so I seldom link to them, but the headline of this article about Climate Change Conservatives looks like it’s viewing things from my side. The fact that climate change is a non-partisan issue would make it a great central issue of someone’s presidential campaign (Jay Inslee)

I’ve been looking for the Climate Change Conservatives myself. Let me know if you find some or you are one. I’d love to talk.

View from the Side 20190416: Environmental Conservatives?

There’s so much action and awareness around the climate crisis in Europe right now. What America needs is someone like Carl Sagan to warn us about climate change. Oh, that’s right, he already did! When Sagan says, “In the next century…” he is talking about this century. The one we live in now.

So often, when I talk or write about issues of climate change, people ask me, “What can I do?” There are so many things individuals can do to work toward addressing climate change. I think political work is the most important thing right now. You can easily sign petitions to make your voice heard. You can call or write or talk to your political representatives. You can join the groups that are already organized toward climate action.

Here’s a petition to get corporations to do their share in the transition to green energy. It’s one effort among many to get climate to the front of the political debate. Sign up!

There are many more places to connect with action on the environmental crisis.

From the side, it looks like all you need to do is decide it’s a real crisis. Then, there will be no end of good work you can do to help save the world.