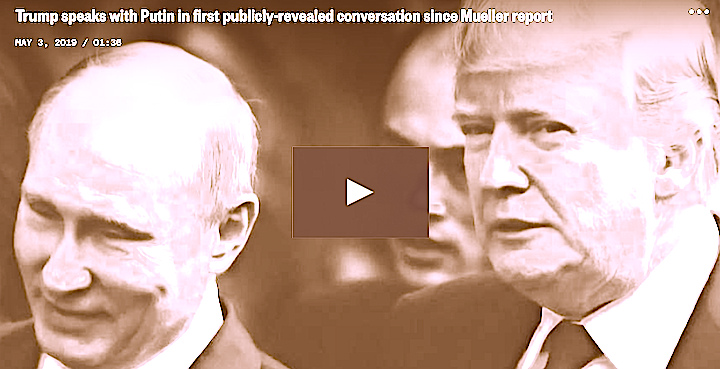 “I was confused. Then I got used to it.” James Tate

Even the surrealist poet in me boggles. Even Kafka struggles to wrap his dead brain around this one. Orwell just grins ironically and turns on one side in his grave. Do you remember 1984? “If you want a picture of the future, imagine a boot stamping on a human face — forever. “ Insult and injury combine here into the grinning face of tyranny confident in its power.

The co-conspirators conspire about whether or not they conspired. Right in front of us all. Trump talks and laughs with Putin about Mueller. And brags about it. Collusion about collusion in front of the world and you wonder why I’m confused. Thank goodness I’ve grown used to it!

And we allow this? We don’t rage in the streets or write impassioned revolutionary screeds? We don’t get the torches and pitchforks and charge the castle? Why? Because America has been hypernormalised.

In any professional sport, this would be a clear taunting penalty. Trump might as well stick his thumb in his clown nose and waggle his fingers at Nancy Pelosi, chanting “Only impeachment can break my bones. Your words can never hu-urt me!” like a kid on a playground. In the surreal circus of Washington, this passes as a normal day.

The obvious response to this blatant criminal is impeachment. The continued delay of the Democrats just confuses me more.

But articles like this remind me why I’m no longer a Democrat. As long as they are dominated by Peloi-ish thinking, they don’t represent me.
https://www.nytimes.com/2019/05/04/us/politics/nancy-pelosi.html

And here’s a view from the other side of the pond. The Guardian doesn’t think the current Congress would even impeach Nixon. I’m sure Pelosi wouldn’t.

I’m so confused I only have questions left today.

Is everybody going to start using my Clown Circus metaphor?

Is KellyAnne Conway in trouble? Oh, that’s right. Bill Barr would have to go after her. And they are both Red clowns.
http://www.madnesshub.com/2019/05/lock-her-up-resistance-twitter-is.html

Speaking of torches and pitchforks, what if Ecocide was a punishable crime? The CEO’s of Exxon, Mobil, and Shell would be shaking in their oily boots.
https://www.youtube.com/watch?v=8xOZDjTW8bI

But what if ecocide is a collective crime, a crime en masse, a crime committed by an entire society? Perhaps the punishment is a given consequences of the crime. A not-so-instant karma. What if those who destroy the earth really are destroying themselves? (‘They’ is ‘us’)

Do you think this is overstatement, exaggeration, poetic license to make a point?

Does this news from the last few days make it sound like I am over-stating?

Fish in the oceans gone completely by 2050?
https://www.cbsnews.com/news/salt-water-fish-extinction-seen-by-2048/

And habitat and species and ecosystems crashing on land?
https://www.huffpost.com/entry/nature-destruction-climate-change-world-biodiversity_n_5c49e78ce4b06ba6d3bb2d44

The vanishing insects? It’s not canaries, but the bugs in the coal mine that show the danger we are in.
https://www.youtube.com/watch?v=YfTNeXOMyvY

Does this all seem so hopeless? What can we do?

Maybe we could elect a climate change president in 2020!

Vox showing support for Inslee. Welcome aboard the Inslee (electric) Train! I highly recommend this in depth article by David Roberts.

Lately, though, climate change has become, according to a recent CNN poll, the single most important issue to Democratic primary voters. After years and years of stumbling along as a second- or third- (or tenth-) tier concern, it’s finally getting its moment in the spotlight.

Maybe we could try The Land Ethic.

Have you ever heard of Aldo Leopold, a naturalist and writer from the mid-20th century? In his classic book, A Sand County Almanac, he proposes an idea, a new way of life, that he calls “the land ethic.” This is a philosophical idea, not detailed in terms of policy, but prescient in its prediction of the need we are in today.

The idea is, in a very simple form, that we treat the ecosystems of the earth as if they were Ethical Entities, deserving of moral treatment in the way humans are. That is to say, we should apply the morality of right and wrong, not just the arithmetic of economic value, to our interactions with the natural world.

I won’t explore that idea in detail now, just offer it as something you might want to learn about, if you are interested.

You can read the original essay here– https://rintintin.colorado.edu/~vancecd/phil3140/Leopold.pdf
And you can learn more about the idea here— https://www.aldoleopold.org/about/the-land-ethic/

I’ll only make one argument, for now, in favor of using something like a land ethic to help us find our way through this environmental crisis.

If corporations can be people under law, treated as beings with rights, then the living ecosystems of the actual non-human earth surely can as well.

In fact, I’d say from the side, we have it backwards. Corporations are economic entities, and should never be treated as living beings. But the living ecosystems of the earth of which we are part and which provide us with our lives deserve to be treated as ethical beings just as much as any of us do.

Let me leave you with some words of experience, vision, and hope from a wise elder: David Suzuki.