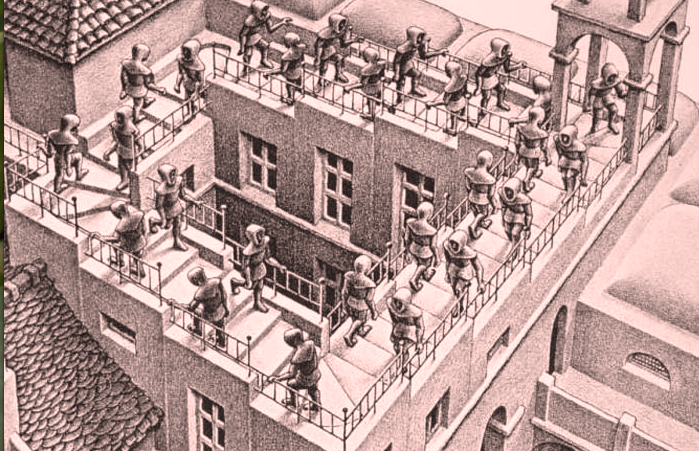 Clown Wars Episode 17, “The Great Clown Paper-Chase Caper” is live in the center ring of P.R. Burn-em’s Two-Party Circus. An M.C. Escher stairway has been set up in the ring. Blue clowns are climbing a set of stairs toward Red Clowns who are climbing the same stairs toward the Blue clowns. Up is down and down is up, and the circle goes around forever. If you are a newbie to the View from the Side, well, step right on over here, and welcome to the the Two-Party Circus!

Right now it’s tax returns. Jeez, isn’t there a way to just skip ahead a few episodes and get to the part where the Supreme Clowns— I mean ‘Court’— violates all law and custom by denying Congress’ right to investigate the President. Their reasoning– incorrect and illegal as it will be– will be simple. If Congress had reason to believe Trump committed any crime, they would have impeached, and their request for documents would be part of an impeachment investigation. Without impeachment, the loaded (in every sense of the word) High Court will say, “Congress has no authority to demand information from the President.” And we’ll have a new Constitution. That future episode ends with a profile of Nancy Pelosi’s face. She will still have her permanent know-it-all smirk on her lips, but a single tear will squeeze itself from the corner of her left eye and disappear into her thick clown make-up.

Fade to black, while the audience weeps.

The headlines, shouted by the Carnival Barkers, are always amusing, even if the show itself is predictable. Red Fox says “Treasury Secretary Mnuchin denies House Dem’s request for tax returns.” I love it. A legal requirement becomes a “request”! And Mnuchin a defiant hero. Blue CNN and CBS are simpler: “Mnuchin refuses to turn over Trumps’ taxes”. Just the facts, ma’am. This LA Times editorial headline at least addresses the true nature of the conflict, announcing “Hello constitutional crisis: The administration won’t turn over Trump’s tax returns”

But only the UK papers will admit the simple truth that “Trump’s treasury secretary ‘breaks law’ by refusing to hand over president’s tax returns for investigation” That from The Independent.

That’s right, I’m saying it here. Not only is Trump a criminal, but now Mnuchin is a criminal, too.

No doubt Barr was contemptuous in his first round with Congress. The surprise TKO by the sharp-punching Kamala Harris knocked the smirk off his face but not the contempt from his answers. Now the Democrats are starting the process to hold him in legal contempt for refusing to appear for round 2. As I’ve written, this is mostly symbolic, since Barr would have to have himself arrested to make the charge stick. The useless process will take a few months, and it will end up with the same High Supremes who will decide the tax returns case. And guess what they’ll say? But what the heck! I guess chasing Barr beats putting the same energy into impeaching Barr’s boss who is making him do this in the first place. Besides, impeachment would be so divisive.

Michael Cohen, a dirty Trump clown, heads off to prison, while reminding us that he was Trump’s lawyer for years, and knows where all the bodies are buried. Sounds like he and his knowledge are getting buried, too. There’s no sympathy here for Cohen. But I sure would like our Congress and the public to know what he knows. It’s just true that dirty people know the dirt about the people they got dirty with.

Cohen said: “There still remains much to be told and I look forward to the day that I can share the truth.”

In the “rats and sinking ships” category, shortly after Rod Rosenstein announced his coming retirement, Mueller says he is stepping out of the In-Justice Dept, too! That should leave him free to actually pursue justice with honest testimony to Congress. Right?

Why is it, again, that Rod Rosenstein hasn’t been asked to testify?

Mueller did the investigation. 400 plus prosecutors agree that Mueller’s report reveals that Trump obstructed justice.

That alone is grounds for impeachment.

And so ends another day’s episode of Clown Wars, viewed from the side. It looks like tomorrow’s episode will bring a whole lot more of the same.