View from the Side 20190508: Primary Fashion Show Preview 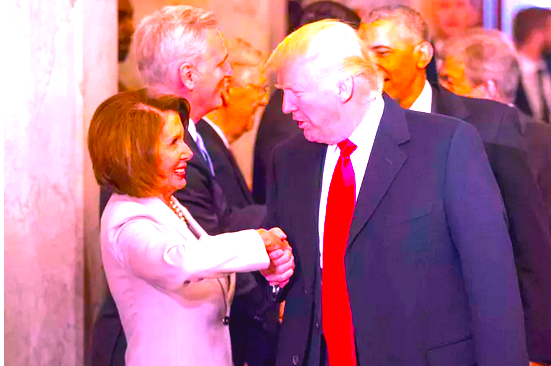 A favorite phrase of the political class is, “We don’t want people to panic.” But if not, why this?

But at least NASA didn’t blow up Washington, D.C. We’ve still got the circus! In the center ring, the great paper chase by the Congressional clowns continues in its eternal spiral of empty threat and spineless subpoena. It would be mesmerizing— if it weren’t so predictable and boring. Today it’s White House counsel Don McGann who will ignore Congress and be threatened with an empty contempt citation. More interesting, perhaps, the big Red clown Donald has finally declared “Executive Privilege” by waving a flag that looks a lot like the skull and crossbones but with an elephant’s skull instead of a human one. This ought to push things more quickly toward the inevitable Supreme Court debacle.

There is no relief from this endless paper chase except impeachment. But Nancy Pelosi grows more bizarre in her refusal to see the obvious, and more convoluted in her explanations of her fear.

Picture a policeman watching some dude break into a jewelry store. “Look at him,” the cop says, “it’s like he’s trying to goad me into arresting him.” Dude cleans out the jewels, walks right by the cop, slaps him with a necklace of pearls and walks on. And Pelosi says, “See, he’s taunting, taunting, taunting.”

“Don’t tell anybody I told you this,” House Speaker Nancy Pelosi told a New York City audience Tuesday morning, in an event hosted by Cornell University. “Trump is goading us to impeach him. That’s what he’s doing. Every single day, he’s just, like, taunting, taunting, taunting. Because he knows that it would be very divisive in the country, but he doesn’t really care. He just wants to solidify his base.”
The list of potentially impeachable offenses grows by the day as the administration refuses to cooperate with congressional requests and subpoenas for the unredacted Mueller report, the president’s tax returns, or testimony from key figures like former White House counsel Don McGahn. Pelosi called these actions obstructions of justice.
“Every day, he’s obstructing justice by saying this one shouldn’t testify and that one shouldn’t testify and the rest,” she said. “So he’s making the case, but he’s just trying to goad us into impeachment.”

Enough of that nonsense for now.

Let’s check out another sideshow for today, where a fashion parade is being set up. More than 20 Blue Clowns are crowded in the dressing room which is wide open for viewing. They are trying on different outfits, waiting for their turn to strut down the runway. From the side, I’ve been avoiding the discussion of the Democratic presidential line-up. I’m a climate voter for 2020, and that gives me a different set of priorities in a candidate than most pundits, apparently. But let’s glance in, for a minute, to what today’s news shows us about the latest spring fashions these Blue Clown beauties are wearing.

Looks like Elizabeth Warren is rocking the policy stage today, with her new plan to stop the opioid crisis. (I’m going to need to find a better word for emergency, bad situation, look out below! issues than “crisis” because those six letters are wearing thin these days. Strangely, nobody but me seems to use the plural. Plural crises, that is.)

If you actually want to know what’s in Warren’s plan, and how it might work, try Vox, not Fox!

Kamala Harris is also drawing some eyes her way, since her sharp questioning of William Barr. The media seems to focus on race and gender with her. NBC notices how much money she is raising from people of color. https://www.nbcnews.com/politics/2020-election/kamala-harris-blows-past-democratic-rivals-fundraising-communities-color-n1000031

CNN, meanwhile, plays a couple of fashion cards at once. Harris “Eyes black voters, women…” their headline informs us .(“Informs” doesn’t quite seem like the right word, does it? Maybe “mal-forms”?) https://www.cnn.com/2019/05/05/politics/kamala-harris-michigan-campaign/index.html

Why don’t the news stories talk about her policies, and what she says she would do as president? Oh, I almost forgot my own metaphor. It’s a fashion show, not a reasoned choice between political candidates.

It looks like the Democratic Party leadership are going retro for this election fashion season. Are oldies goldies, or are the oldies just moldies?

The 2020 Democratic Clown Fashion Show is just getting set up. From the side, it looks like the Democratic Party takes the progressive voters for granted, even the independent voters like me. They assume we will vote for any Democrat over the Republican offering. That may be true for some. But a greater number, I believe, are disenfranchised by the conservative Democrats. Many progressives believe Democrats, as a party at least, don’t actually stand for progressive values. The Democrats will lose votes in the next election by moving the party to the right, including, perhaps, mine.

It was pandering to the conservative wing of the party that led to Al Gore’s defeat in 2000 (along with the Supreme Court coup to stop vote counting!). Instead of moving policy and platform and appointments toward progressive ideas, the DNC folks and Gore himself to some extent, just complained about the progressive movement under Nader. And ended up losing.

That history should have taught the Democrats to embrace their progressives. Losing the progressives this time will guarantee Trump’s re-election.

And the issue that will bring most progressives and independent voters to the polls for a Democrat is climate change. If the Democratic candidate puts climate at the top of their priorities, and seems to have a credible plan to move forward, I will vote for them. I’m sorry to say that counts out Joe Biden, probably Kamala Harris as well.

Jay Inslee still looks best of all the Democratic candidates, with his rolled up sleeves. He’s not in the clown circus, and the Blue clowns are largely ignoring him. But he’s caught my eye from the side, because I’m a climate voter for 2020, and I want to vote for someone who will get to work on the environmental crisis. I should say, crises.