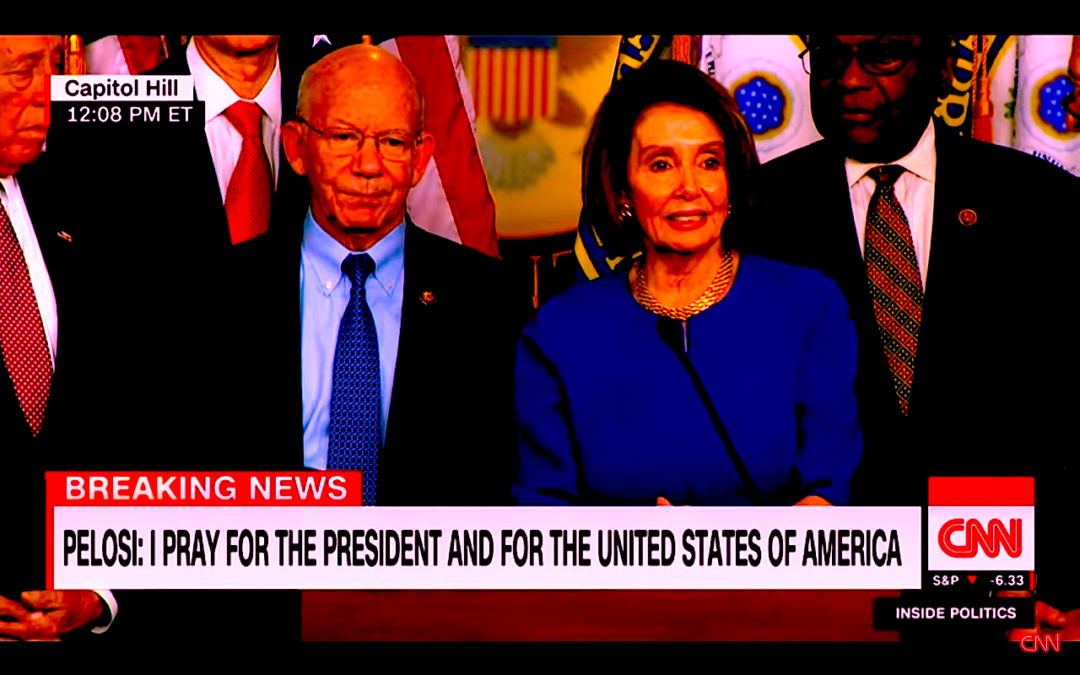 When Trump simply refused to talk with the Democratic leadership about infrastructure today, I once again swallowed my hopium and for a few moments felt optimistic enough to believe that this would be the last straw. I wanted to see the Democrats finally unified around the truth that Trump must be impeached. I nodded off, and had a brief dream in which, from a great distance, I heard Pelosi speak the word, “Impeach”. No real surprise that the hopium wore off quickly. I woke, and came down to a deep disappointment as I watched this fairly brief press conference immediately after Trump’s Temper Tantrum. If you still support Pelosi, I dare you to risk the first five minutes.

Notice how inarticulate and scattered Princess Pelosi is. Jeez! I welcome her prayers and all that. But I’d much rather have her actually do something… like impeach the mother fooker already! In my hopium dreams, I guess. Well, her prayers are better than nothing, since nothing else is what we get from her.

Instead of prayers, I sure would have liked to see her actually do something to protect us from the Clown Emperor, with his orange wig, who is obviously hurting the rest of us a lot more than he is Pelosi. Today’s little snit fit from His Clownishness is just the most recent arrogant display, each growing more blatant than the last the longer his crimes go unpunished.

But I really don’t want to disparage Pelosi anymore. Something is deeply and visibly broken in her. I feel bad, actually, watching her struggle, and will support her— in her retirement. Soon, I hope. Though history won’t be even as kind to her as I would like to be.

That’s Peter DeFazio standing there, at Nancy’s right shoulder, looking guilty as hell. As well he should.

And with literal tears in my eyes I realized the answer to a question I’ve been asking for weeks now. Why would such an out-spoken progressive as Peter, in words if not in actions, not speak out for impeachment? I wrote to him about it, and got a very canned reply a month later, regurgitating Pelosi’s lines. It was pretty weak, and I replied with some emotion. He hasn’t yet re-replied. He is, after all, my representative, though he doesn’t represent me any longer, and it makes me pretty frustrated and sad to see him on the conservative side of things. But I couldn’t understand why he would take that stance, since he obviously didn’t believe the illogical spin he was spouting in his letter to me. He’s just smarter than that.

Now, I see it all. He is standing behind her shoulder, in the perfect position to quickly kneel and kiss Nancy Pelosi’s ass. He’s after something, an even more important position, maybe. Maybe he even has his eyes on her job eventually. But I know he’s smart enough to know he’s selling out the US Constitution to get it. And his constituents. No wonder he looks guilty. I mean it. I cried.

Then, after Schumer’s slightly less muddled comments, during the bullshit session in the last few minutes of the clip, Nancy Pelosi— with quite a grin stuck there above her chins— introduced DeFazio to the reporters as Chair of the Transportation Committee. And Ron Wyden, too, though he was mostly off camera. OMG. It was true. Peter DeFazio has sold out for power.

The brown-nosing Peter is giving to Pelosi must be working, though he looked more nervous than proud to be called out specifically by her.

He should be embarrassed.

It was a sad moment in American politics.

And even more so for Oregon.

So the Blue Clowns have made up a new dance. It’s called the Pelosi Parakeet Parade. A bunch of Blue clowns with Red highlights do a sort of Macarena-like number as a circle dance, each one imitating every motion and sound made by the parade leader, House Squawker Pelosi. “Divisive, Divisive,” they chant together. The dance involves a whole lot of moving to the middle.

“Look, there’s Nadler” The kids in the grandstand nudge their parents — who are watching the girl on the trapeze— in the ribs. “Even Wyden’s in the Parade.” It’s true. Sad, but true. “But who’s that one, Daddy, the one with those little glasses, nudging right up against Squawker Nancy’s backside?” Big sister looks up, curious. “Oooh,” she cringes, “What’s he do-o-ing? That’s so gro-o-o-oss!” And Dad just groans and covers his own eyes, intoning “Oh, no, not DeFazio!” Some catchy music has everybody tapping their feet. The group circles in the center of the ring, while the rest of the Blue Clowns look on with arms crossed and angry looks on their faces. AOC— who wears that shit when it comes to her clown suit— is speaking intelligently, which means indecipherably, to the other Blue clowns, who are ignoring her.

From the Oregon side, though, I can’t take my eyes off the grim spectacle of Peter DeFazio, wiping his Ben Franklin spectacles with a grim look on his face, his lips apparently forever sealed.

Oh, no! It looks like we’re into something thick, now.