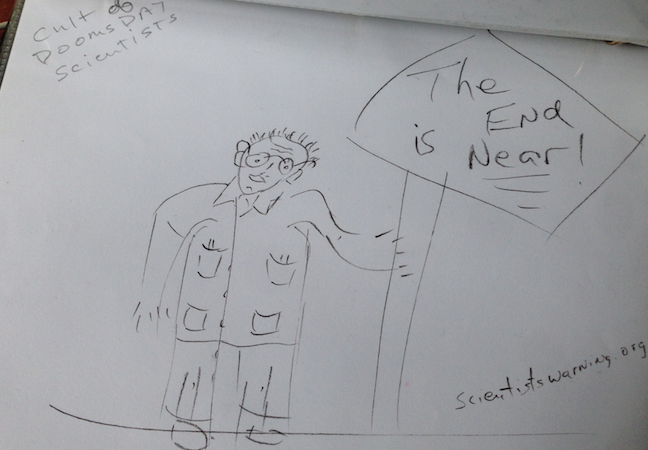 Civilization exists by geological consent, subject to change without notice. Will Durant

Meet the Cult. The Cult of the Doomsday Scientists, that is.

On the outside of the big top of P.R. Burn-em’s Two-Party Circus are sideshows and small tents with red lights over the doorways and a teeming crowd of seamy characters selling all sorts of things legal and illegal. It’s all pretty hard to ignore, and it’s pretty hard to pay attention to any one thing at a time. But you really want to see the big show, so you forge on toward the ticket-takers, your own ticket clutched like a good roach in one hand.

As you move toward the entrance of the tent, excited to see the high wire act, your attention is drawn toward a flickering light coming from the canvas of the tent you are walking into. It looks like the fookin’ tent is on fire! But someone shouts at you to buy a new tracking device so their corporation can follow your every move, “Latest model, 5G!” they beckon and cajole and your attention is drawn away from the burning tent again. A short transaction ensues.

You walk on with your new device, only slightly more in debt than you were before. You’re almost there, in line now with a thousand other clamoring fans, some with their orange AGAM hats, others with their red and blue and green identifying headgear. Across from you, as you wait to enter the big tent, only vaguely aware now of the smell of canvas burning, you see two strange figures. They are dressed in white lab coats— the classic, you know, pocket protectors, ragged crew cut hair, thick-brimmed glasses. Looks like a couple of real scientists, all right. But what’s weird is they are chanting like fookin’ Hari Krishnas except what they’re saying sounds like “it’safookin’crisis” and they’re waving hu-u-uge cardboard signs with incredibly complex charts on them, and big letters scrawled across the top reading, “Repent. The End is Here!” Well, one of the signs says, “Here”, the other “Near.” But they rhyme! And as you walk past, into the screaming arena at last, you hear their words ringing in your ears. “The fookin’ tent is burning down!” Your companion turns to you, and says, “They’re cute. They sound a little like Bill Nye, the Science Guy.”

Yes, folks, it’s the Cult of the Doomsday Scientists, who have lately taken to standing around the doorways of the Two-Party Circus, waving their frantic signs in everybody’s face and talking in really big words. I’ve gotten to know these cultists pretty well this last few months. It’s a big group, and I’d like you to meet two of the loudest of these gloom-and-doom boffins.

So here’s a conversation between two of these scientists/cultists who don’t, quite, agree with each other about when our doom will come. Meet Stuart Scott and Guy McPherson. Stuart Scott is “Near” and McPherson “Here” in this dynamic duo. Meet two powerful members of the Cult of Doomsday Scientists.

I’ve got a lot more to say about this crazy new apocalyptic sect of the religion of science. I’ll only say now that I’m not sure, but I think I may have by accident swallowed a good dose of their Kool-Aid.

But before I start into my own sermon, you reach, thank god!, the entrance to the big tent. And you get sucked into the swirl and wonder of the two-party circus. Forget those crazy scientists for now. The Clowns are on Parade!

Lots of links for you, with barely any snide commentary, from the Side.

There’s some heavy weather comin’ down out there.

And while 100 degree temps hit the south, snow hits the Grand Canyon. And more!
https://www.cnn.com/2019/05/27/us/severe-weather-flood-watch-wxc/index.html

The Clown Wars continue on all fronts. And that’s the most fun of all. The Trump Bunker fires out at the press, shredding the Constitution in the process.

“This is not about Julian Assange,” Wyden said in a statement. “This is about the use of the Espionage Act to charge a recipient and publisher of classified information. I am extremely concerned about the precedent this may set and potential dangers to the work of journalists and the First Amendment.”

I’ve said it before and I’ll say it again, please don’t send the Side any classified info. No one will believe it, anyway.

This article raises a good question about why Mueller is resisting public testimony, but isn’t very conclusive on its answers. So many mysteries remain! I do, of course, have a theory.
https://thehill.com/opinion/judiciary/445534-why-mueller-may-be-fighting-a-public-hearing-on-capitol-hill

Geriatric Joe Biden’s camp joining the old folks in the “playground-mind-game”. Oh, those are some real zingers, Joe! . A bunch of old folks acting like children. Leave that to me, will you!
https://thehill.com/homenews/campaign/445598-biden-aide-trump-typo-tweet-from-japan-unhinged-and-erratic

Now here’s a guy who talks my language. Raskin goes straight at Trump. But he leaves one word out of his speech. The “I-word”.
https://www.c-span.org/video/?c4796561

This opinion piece by legal scholar Frances Lynch from the Hill concurs. No clowning around here.
https://thehill.com/opinion/white-house/445600-america-has-no-time-to-wait-for-impeachment

Did I mention that Lindsey Graham is a snake, and a war-hawk (I know, mixed metaphors are my thing, man) and a Trump tool, too? Not a Constitutionalist Republican at all.
https://governmentslaves.news/2019/05/26/lindsey-graham-proposes-invading-venezuela-to-oust-maduro/

Hope Hicks done as Virginia Woolf from Slate. Goes on a bit, but worth it. I know, I know, everybody’s a critic, right? Enjoy!
https://slate.com/culture/2019/05/hope-hicks-congressional-subpoena-existential-question.html

Here’s an interesting sideshow: NSA-built software used to cyber-attack Baltimore and other cities. Eternal Blue, who are you?
https://www.youtube.com/watch?v=eVBQrga0EgQ

I’ll end with a preview of a View from the Future.

We’re Fu-Barred, folks! Coming soon from P.R. Burn-em. A first for American democracy. Tyranny itself, the real king of the jungle. The lions are coming out of their cages. It’s gonna be a purge. It’s gonna be a pogrom, baby! Investigate-Gate(tm) is about to get fierce. Think Night of the Long Knives. I’m serious, it’s gonna be something special. Get your ticket now. You ain’t never seen nothing like it, not around these parts.