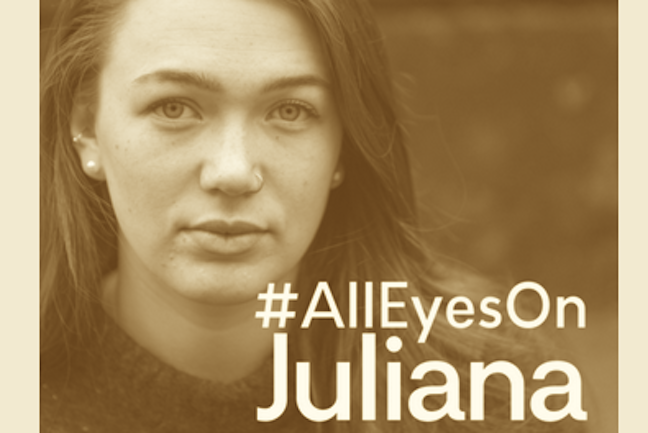 Coming Soon to a Future Near You

On the Side, every Friday’s Friday for Future.

Coming soon to a future near you— Juliana Vs. the U.S.of A. Kicking off on June 4, this epic trial for the epoch opens in Portland, Oregon. Do kids have a right to a future? We’re gonna find out, folks. Will the media mention it? A search of Google News suggests not so much. But you know I’ll be talking about this trial every day, from the side. For a while, at least. Tune in here to find out the future.

The coming flood of ecocide trials begins with this first splash. Exxon Knew, and the US government did, too.

Speaking of letting the kids speak, here’s TeenVogue on Greta Thunberg and her Friday School Strikes for Climate. If I had a job, I’d strike with her!
https://www.teenvogue.com/story/greta-thunberg-schooled-world-leaders-again-everyone-climate-strike-r20-summit

This long season of flooding across the American heartland is not just hard on homeowners, though. We all need to eat, and where do we grow much of our corn and wheat? You guessed it.
https://qz.com/1631469/midwest-floods-linked-to-climate-change-are-devastating-us-farms/

Yeah, I know, I know, every week I say the same thing. But it still gives me a little tingle every time. Try it with me now, out loud. I’m A Climate Voter for 2020.

‘Cause this shit’s gittin’ real. And real deep, too. We’re gonna need a paddle. And a canoe.

On to some links, and a few quick reviews of the news. Here are few notes from this week’s exciting episode of “So Goes the Geriocracy”

On Mueller’s statement:
Robert Mueller said his team found “insufficient evidence to charge a broader conspiracy.” That means there was some evidence, right? Otherwise he would have said, “No evidence.” Right? So, what if it was, like, almost enough evidence to charge, but not quite? Like, just a tiny bit, a smidgeon, a mote of evidence short of enough. Just hardly, barely less than sufficient. Like what if Donny had answered questions in person and not lied? Would that have given sufficient evidence to charge? And what if the obstruction of justice Mueller describes actually hid other evidence of the broader conspiracy? I’m starting to think there might, conceivably, possibly, maybe, have actually been a broader conspiracy between Trump’s campaign and Russia. Two plus two. Four?

On Impeachment:
“Song of the summer”, eh? Nice one, Atlantic. Not only do these authors begin with a perfectly reasonable metaphor, they extend it to refresh the cliched phrase “changing their tune…” They also make good sense about impeachment the rest of the way through. And, strangely, they agree with me. Only failing— they never return to the tonic, and so the melody of their metaphor doesn’t complete itself. Good songs circle back on themselves like good metaphors. Otherwise, nice summery— summary— tune. Captures the essence of the arguments for impeachment.
https://www.theatlantic.com/politics/archive/2019/05/trump-impeach-2020-democrats/590482/

I can’t believe I’m linking to that bloviator Cenk Uygur. Merhaba, dude! Look up the word “bloviator”, if you want. But, hey, anybody who uses the phrase “dereliction of duty” and Nancy Pelosi in the same sentence deserves a shout out from the Side. I know, I know, you stole my metaphor about the president shooting someone on the street and all that. And then you ended with “let him slide,” and “ball’s in her court”. Cliche penalty there, dude. But overall, some good analysis from Cenk. For a change. Gotta luv the Turks, whenever Cenk Uygur isn’t yelling.
https://www.youtube.com/watch?v=sYrTkNhGPM0

But you don’t gotta luv Fox. Fox News, in a bit of a turn-around from their “taunting” reverse-psychology phase a few weeks ago, is now arguing hard that Nancy’s right after all, and the Dems better not impeach… for all her same lame reasons. This time, they do so in the voice of none other than Karl Rove. Yep, that ass-wipe. And if you believe Karl has the sincere interest of the Dems or the country at heart, well, I got a bridge to sell you. Speaking of cliches.
https://www.foxnews.com/opinion/karl-rove-five-things-that-will-happen-if-house-dems-move-to-impeach-trump

And this from The Hill. Hey, that was my cowboy movie metaphor! Good steal, bad fookin’ analysis. The bad guys aren’t dead, because Mueller was told not to shoot. The Hill should have listened to my logic while they were lifting my image. News for this writer, impeachment IS about Russian interference. Pelosi doesn’t mention it much because she doesn’t want impeachment, not because she’s distracted by it. Get it now? Jeez loo-fookin’-wheeze. Two plus two. Four.
https://thehill.com/opinion/white-house/446154-if-your-hot-take-from-mueller-was-obstruction-or-impeachment-you-werent

On Investigate-Gate(tm) aka Spy vs. Spy aka Clown Wars Counter-Attack:
Always worth checking out the far far side. Yikes! This is clown wars drawn with a pen knife on someone’s back. Most likely ours. I don’t think most people know how extreme the thinking and plotting for vengeance has gotten on the fringes. This is the Bannon-side of the Orange base. And all your base gonna belong to them, if they have their way.
https://thenationalsentinel.com/2019/05/28/going-to-ground-who-else-has-not-been-identified-in-this-coup-attempt-against-potus-trump/

You’ll notice they don’t actually identify who isn’t identified. But they know they’re there. And Trump’s gonna get ‘em. They source this Guardian article from 2017. Which is interesting. Spy vs. Spy stuff. It’s gonna be a purge. It’s gonna be a pogrom, baby!
https://www.theguardian.com/uk-news/2017/apr/13/british-spies-first-to-spot-trump-team-links-russia

And this well-researched article gets into a lot more detail about the coming purge. This is definitely Spy vs. Spy stuff. It’s a Mad world, Mad world, after all.
https://taibbi.substack.com/p/the-intelligence-community-needs

Look out, folks. It’s gonna get hot in the circus. And the songs of summer haven’t even started yet.

But so far it’s still pretty cool, over here on the side. Join me again tomorrow. No worries about the heat. I’ll throw plenty of shade out for all of us.