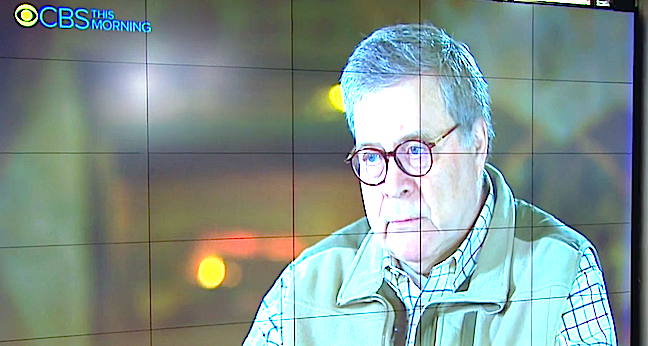 The Clown Wars Counter-Attack is really building up now, slowly taking over the center ring of the Two-Party Circus. This is a pretty serious barking battle between two long time pit-fighting bulldogs: Barr and Comey. Comey is a private citizen now, so he doesn’t have any more teeth. But once you’re in, they say, you’re in. You gotta bet he still ‘knows people’. Let’s put it that way. It’s funny that Comey breaks out the “conspiracy theory” put-down. It’s pretty stock, for one thing. but it’s also ironic, in that Barr’s conspiracy theory is about the conspiracy that revealed the conspiracy between Trump and the Russians. Remember that conspiracy theory? Seems like a lot of conspiracy theorizing going around on all sides these days. Heck, even on the Side.
https://www.foxnews.com/politics/comey-denounces-barr-after-cbs-interview-an-ag-should-not-be-echoing-conspiracy-theories

I linked Barr’s frightening interview yesterday. Comey’s reply pretty much echoes my reading. Barr is bear-baiting the far right fringes to build up support as he starts his attack.

This opinion piece in NY Post shows how low the blows are going to get in this next front in the Clown Wars.
https://nypost.com/2019/06/01/william-barr-determined-to-unravel-truth-behind-russia-lie/

There is a darker side to the circus, a shadowy side, where the spotlights don’t shine. You can see the gray shapes of people moving things around back there, pushing wagons and carts from which frightening noises occasionally arise, as if unknown animals whose names are usually spoken only in whispered acronyms were held there in darkened cages. It feels like they might come leaping out at any moment. Keeps the crowd on edge, eating up a little more cotton candy and popcorn to relax. So far, Barr has kept his attacking forces carefully away from the darkest edges of the circus, perhaps afraid of accidentally opening one of the cages. But he’s getting closer and closer, provoking the lions and tigers, and the growls are growing louder, though not yet into roars.

Adam Schiff, baring a tooth to growl a little, says that Trump threatens national security by turning Barr loose like a drooling dog. Schiff sometimes has a hard, cold look about him that intrigues me. Few Democrats look capable of actually clenching a fist, but I’d like to see Schiff ask a few questions of Bill Barr-behind-bars in the ring.
https://www.foxnews.com/politics/adam-schiff-intelligence-communities-trump-national-security

The Washington Post, though, is more concerned with Barr-behind-bars’ latest fashion look. And he’s not even running for anything?
https://www.washingtonpost.com/lifestyle/style/what-was-william-barrs-fleece-vest-trying-to-tell-us/2019/05/31/01fdf418-83d0-11e9-bce7-40b4105f7ca0_story.html

It’s pretty easy to see that the fireplace and vest and the whole look was meant to give warm and fuzzies to the Dick Cheney, shoot-‘em-inna-face crowd. Shoulda been a moose head hanging over that fireplace. And a skewered squirrel turning on a spit. Roasted Rocky after the interview, Weeth vodka… Doesn’t Barr remind you just a little of Boris Badenov? Just stick a skinny mustache on him, under the clown nose, dahlink.

Will Rocky get roasted? Will Bullwinkle (who looks a lot like the Democratic Donkey) get off the hook? Stayed tooned, folks, for the next exciting episode:

Done on One Side? or Barr-behind-bars Bares His Teeth.

Dang, another pretty good piece from Cenk and the Young Turks. He goes after Nancy Pelosi full on. The key point here is that only an impeachment investigation will “make the case” for the American people and for the Senate. The jury doesn’t convict before the trial. Cenk’s quoting me again, with the “shoot someone on 5th” line. Thanks, my friend!
https://www.youtube.com/watch?v=JUJlNzu9t9Y

I’d submit this as an argument for impeachment. Why would Breitbart back up Pelosi? Maybe they’re trying to help. That’s sweet, really.
https://www.breitbart.com/politics/2019/05/30/exclusive-alan-dershowitz-impeachment-is-kiss-of-death-for-democrats-in-2020/

In fact, I’m definitely willing to wager that the Dems do better in 2020 with impeachment than without. Dershowitz, no friend, knows that perfectly well. And isn’t the “kiss of death” a sort of mob type of thing to say? Subtle threat? There may be more to Pelosi’s refusal to impeach than senility. She might just be plain old-fashioned scared of getting her knees knocked. I don’t know that I blame her.

New Jersey Dems, who know a bit about Trump’s history and that type of thing, are pushing for impeachment.
https://www.nj.com/opinion/2019/06/nj-political-insiders-consider-new-impeachment-pressure-on-pelosi-dark-money-tactics-in-nj.html

And, speaking of running for something, the Primary Fashion Show contestants gather for more preliminary posing at the California Democratic convention.
https://www.vox.com/policy-and-politics/2019/6/2/18649361/2020-democratic-presidential-candidates-california-democratic-party-convention

And here’s a little glimpse into the machinations of the Party machinery grinding away behind the scenes of the show that the audience gets to see.
Thom Hartmann interviews Greg Palast on Dem manipulation of the primary in California
https://www.youtube.com/watch?v=XUK1oytTrso

But, almost as if they know something is wrong with the show— or else because they are just shite-buckets— the circus crowd is getting rowdy out there!
https://www.bbc.com/news/world-us-canada-48487984

It might be safer chilling out on the side for a while.

Until the morning comes.