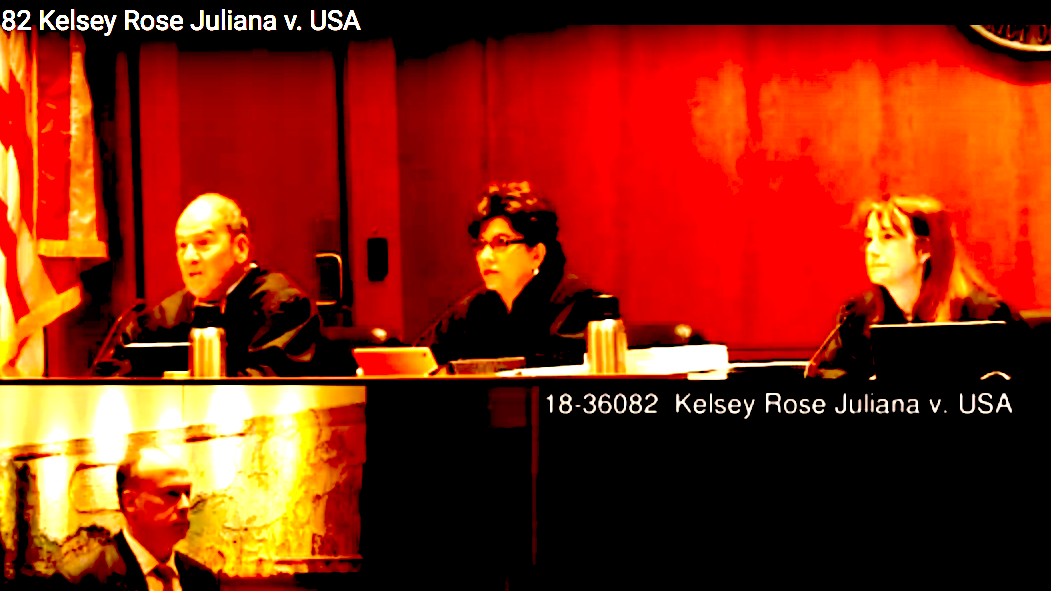 The Show Must Go On!

I watched the premier episode of The Trial of All Time on real-life court TV yesterday. It was a harsh opening for the new series, and I’m afraid that the entire season may be canceled before the second episode even airs. The Federal District Court three judge panel now has to decide whether to cancel the show— I mean the lawsuit “Juliana v United States”— based on the government’s fairly sarcastic position that there is no real case here at all. Or these judges, like a panel of TV show reviewers, may choose to let the show play out, and allow the arguments and evidence to be presented at trial.

Have you heard about this new TV show, a real-life courtroom drama? Juliana v United States, on the 3rd District reality channel. The Climate Kids are suing you and me— that is, they are suing our government which of course represents us. What’s their beef? Well, these kids claim our government has helped the fossil fuel industry destroy the world. These crazy kids claim they have a basic right to an environment in which they can live. They seem to think it harms them to wipe out all life as we know it. They’re suing the US government for the constitutional right to have a world to live in.

Seems like a weird premise, but I’m caught up in the action already. I sure hope these judges decide to let the show go on.

Looking in from the side, I don’t have a prediction about how this will end up. (I know, I know, that’s so out of character. But I’m a poet, Jim, not a fookin’ lawyer!). The male judge showed some signs of siding with the shite-bucket government lawyer. The judge put on a bit of a mocking voice as he offered a hypothetical example. But he also applauded the plaintiffs’ evidence of harm, said the government’s inaction might rise to the level of “criminal neglect”, but questioned whether it was a “constitutional” right. The two women judges seemed a bit more sympathetic to the kids.

According to CNN it could be weeks or even months until a decision is made to stay the case or allow it to go to trial.

Here’s CNN’s summary of the hearing.

And a UK view from the Independent
https://www.independent.co.uk/news/world/americas/trump-youth-climate-change-lawsuit-oregon-court-a8945316.html

Hey, you can even watch it yourself, and make up your own mind. (The first 10 minutes are pretty dull! Skip ahead.)
https://www.youtube.com/watch?v=6PGCSWm86OI

Here are a few notes from my viewing.

*Under questioning the government lawyer says there is no degree of harm that could be argued Constitutionally. He says, sorry, “however painful it might be…” there is no constitutional right to life and liberty. Ouchie!! That is painful. The government’s lawyer says the only remedy to such a bad government is “the political remedy of removing them from office.” This joker actually just said the only solution to the climate crisis is impeachment! ( I swear he did. Listen for yourself at 15:00 of the video. Though of course he couldn’t use the “i-word” in polite company.)

*In an especially snide remark, the government’s shite-bucket lawyer says the kids’ suit has “flunked”. One judge calls him out on it, saying some students in the audience might find that insulting. He apologizes with a shite-eating grin. Flunk you, shite-bucket! Maybe his attitude will turn these judges against him.

*Dude keeps talking about his “bucket of arguments”. Shite-buckets, I think he meant to say.

*The Climate Kids’ lawyer makes it clear that they aren’t just claiming inaction by the government. She says our government has actively assisted those who are destroying the future. With subsidies, with leases on public lands. 25% of US CO2 emissions come from public lands. She lists the third and fifth amendment rights that the government has violated. But the judges don’t seem swayed.

*She has a ton of cases to cite, pretty well-prepared. Again and again, she compares this case to other civil rights and justice cases. An entire class of people have systematically had their rights denied. As in segregation cases. As in women’s rights cases.

*Her final statement again links this case to race and gender justice. She says “government sanctioned climate destruction” is the constitutional question of this century, as race and women’s rights were of the last. Lift the stay, she says, allow the trial. The show must go on!

To this reviewer, it seems well worth letting this new reality show play out through at least one season. The premiere was slow, but suggested a great coming plot line. Let’s see the evidence and and hear the arguments. Who doesn’t love a good courtroom drama? Golly, it’s only the future of the human race at stake. Might as well let it go forward and see how it turns out. Could end up being a pretty good show.

There’s this line in John Ford’s Young Mister Lincoln I’ve always liked. In Lincoln’s first court case, the opposing attorney pins him with a complex point of legalese and case citations. Lincoln turns to the jury and says simply, “I don’t know much about the law. But I know what’s right.”

A decision from these judges on whether to let the case go to trial is coming in “weeks or months” according to CNN. Good thing we have plenty of time to wait. But however long it is, I hope these judges worry less about the law, and more about what’s right.

Take a look through today’s links, and judge for yourself if you think these Climate Kids’ right to a future is being violated. Or your own, if you want to live in a still-living world. Can we wait any longer to make a change?

The future, or now?
https://www.commondreams.org/news/2019/06/04/extreme-flooding-across-midwest-exactly-line-scientific-warnings-climate-crisis

The overlapping environmental crises show this is more than a CO2 issue.
https://www.theguardian.com/environment/2019/jun/05/climate-crisis-and-antibiotic-use-could-sink-fish-farming-industry-report

And here’s a little prelude to tomorrow’s D-Day View from the Side.
https://www.theguardian.com/commentisfree/2019/jun/04/climate-change-world-war-iii-green-new-deal