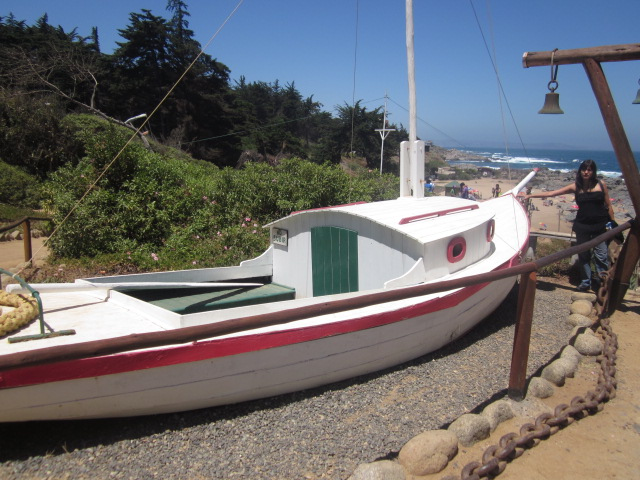 I wrote those lines many years ago, in a long poem called simply “The Sea”. The immense, seemingly empty vastness of the ocean has always caught my imagination, though I haven’t gone out on the oceans much. Like Pablo Neruda, I’ve kept my boat mostly on the shore, looking outward at what seems beyond my understanding. With its endless expanse and unimaginable depth, the ocean— almost like the night sky— seems too big for humans to ever affect or change in any way. It seems beyond human ken, beyond any real knowing, like death, like outer space, a universe apart from us, beyond us. The ocean seems almost a god in its own right, a power beyond humanity.

Looking out across the ocean toward the horizon, it is hard to imagine that human civilization could possibly destroy the life of that vast and abundant world. It’s difficult to even picture the ocean without life in it— without the swirling schools of bright fish, the wheeling, diving birds. It’s hard to see the seas barren, acidic, dead. It’s hard to believe that coral reefs could bleach and wither, that familiar fish species could disappear forever, that the great whales and acrobatic dolphins and foolish looking walruses and the slow-moving manatees and the barking sea lions could all go extinct. It’s nearly impossible to believe that humanity could kill, could be even now in the final stages of actually, literally, killing this seemingly eternal environment.

But current environmental science indicates that is exactly what we are doing.

The ocean is the greater part of the earth, the largest ecosystem of all, and the largest contributor to the stability of climate and the overall system of the living earth. We live on the land. But we cannot live without the oceans.

On this World Oceans Day, let’s notice what we are doing to this most important part of our planet. And maybe we can pledge ourselves to seeing the sea differently. Not as the great “away” to throw our trash and our poisons. Not even as a “resource” to exploit to depletion and extinction. But rather to see it as a necessary living part of the living earth. To see that the health of the sea is a key to the health of the world and of humanity.

We can save ourselves only if we save the seven seas.

This piece by Rep. Suzanne Bonamici points us in a good direction, if the rest of our government would listen.
https://thehill.com/blogs/congress-blog/energy-environment/447567-in-the-climate-crisis-power-of-our-ocean-is-too-great

Some amount of global warming is already locked in from the CO2 we have added to our atmosphere. Some amount of sea level rise is also locked in. The scientific question now is, “How far, how fast will the seas rise?” Why the headline singles out Shanghai, rather than, say, New York City or Miami is a mystery to me.
https://www.cnn.com/2019/05/21/health/climate-change-sea-levels-scn-intl/index.html

But the environmental crisis in the oceans is far more than just CO2.
https://www.sciencealert.com/the-amount-of-plastic-swirling-in-the-oceans-depths-is-far-more-than-we-thought

But hey, I’m a poet, Jim, not an oceanographer. So here’s a little etymology for ya! Because words matter, too.
https://www.scmp.com/magazines/post-magazine/short-reads/article/3013436/world-oceans-day-look-origins-word-sea-body

And an opinion from Bloomberg, hardly a bastion of progressive extremism.
https://www.bloomberg.com/opinion/articles/2019-06-07/mike-bloomberg-s-beyond-carbon-the-climate-crisis-is-now

But saving the world from catastrophic climate change is just that sort of heroic effort, and we can start it right now, Bloomberg LP founder Mike Bloomberg writes. It’s bigger than going to the moon, and far more vital. Just like the moonshot, staving off the worst effects of climate change will be expensive and sometimes unpopular, Mike notes. Unlike JFK, current president DJT doesn’t think the job is worth doing, and his party agrees. But we can’t wait and hope for the best in the next election, Mike writes.
So he’s putting $500 million into a new initiative called Beyond Carbon, which will fight Trump’s regressive EPA, invest in clean technology, and promote political activism for climate solutions.

But, if we’re going to save the seven seas and ourselves, this is what we’re up against. From the Trump Bunker comes Mike Pompeo to spout the usual lies and nonsense. Don’t worry, he says, no problem. Ignoring the national security assessments that rank climate change as one of our greatest threats.
https://www.cnn.com/2019/06/07/politics/pompeo-climate-change-washington-times/index.html

And even the Dinosaur National Committee, I mean the Democratic National Committee, doesn’t want us to pay too much attention to the climate, and certainly not to the candidates who are best equipped to move us in the right direction.
https://truthout.org/articles/dnc-faces-outrage-as-it-announces-it-will-not-host-2020-debate-on-climate-crisis/

And that’s why it is so crucial to remove the current, criminal administration with the only tool available for that job: Impeachment.

If you’re on my side, and you want impeachment now, you, too, can let your voice be heard. June 15.
https://www.commondreams.org/news/2019/06/07/impeachtrump-day-action-announced-because-it-clear-congress-wont-act-unless-we

The list of Representatives favoring impeachment is growing
https://www.vox.com/2019/6/7/18653931/house-democrats-impeachment-inquiry-pelosi

And Chair of the House Judiciary Committee, Jerold Nadler is beginning find his strength. He’s speaking much more directly about what he knows is the right path. Not the path Pelosi is walking, toward extinction cliff. Nadler knows, now, that an impeachment inquiry is the only way to bring accountability to a criminal president.
https://www.cnn.com/videos/politics/2019/06/06/nadler-impeachment-inquiry-pelosi-blitzer-burnett-monologue-ebof-sot-vpx.cnn

Vanity Fair describes Nadler’s dilemma. To obey his general and keep heading for the cliff, or turn to fight our enemy, even against Pelosi’s wishes.
https://www.vanityfair.com/news/2019/06/one-of-pelosis-top-deputies-jerrold-nadler-is-pushing-for-trump-impeachment

Not sure why I’m linking this one. A negative example. It’s simply one of the worst articles I’ve ever read. It says absolutely nothing, and I have nothing to say about it, it’s so bad. And I like the New Yorker.
https://www.newyorker.com/news/daily-comment/nancy-pelosi-and-the-democratic-debate-about-the-best-way-to-get-donald-trump-out-of-office

This is a few days old, but if you missed it, an impeachment defense lawyer lays it out for you. Pelosi is just wrong. And weird!
https://www.cnn.com/2019/06/03/opinions/nancy-pelosis-weird-and-wrong-views-about-impeachment-garber/index.html

I hate it when Republicans talk better sense than Democrats. But, from the side, I’m sorta committed to listening to the side that makes the most sense.
https://www.alternet.org/2019/06/former-bush-counsel-robert-painter-democrats-must-impeach-or-lose/

If the Democrats do not open a formal impeachment inquiry they risk losing to Donald Trump. The Democrats cannot run on a platform which says that President Trump is guilty of serious crimes in office if they’re not willing to impeach him.

Here Painter virtually quotes what I said in my letter to the Democratic Leadership three months ago.

And you know what? I still agree with him. From the Side.