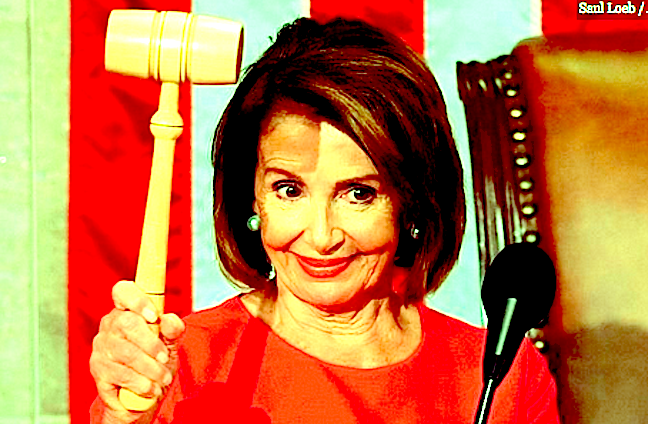 For the Love of a Gavel

Nancy Pelosi loves her gavel. She loves to wave it around. She loves to pound it on the table. She likes to wear a little brooch in the shape of— you guessed it!— a gavel.

Yes, Nancy loves her gavel. She grips it as tightly as those old hands can. And she ain’t lettin’ go anytime soon. You’ll have to pry it from her cold, dead fingers, fooker. It’s her power, her gun, her precious ring, her magic staff for whatever witchery she dreams she can still muster. She’ll never relinquish power willingly. And, she won’t allow impeachment, under any circumstances whatsoever.

You better decide soon, ‘cause look out, baby, Bill Barr-behind-bars is coming for you! He understands, not wrongly, that a strong attack is the best defense, so he’s going after you. He can see how weak you are, now, with a stumbling Pelosi at the helm. He’s a mean one, all right, and I’m not sure who among the Demosaurs is his match. Not Nancy Pelosi, that’s for sure.
https://www.foxnews.com/politics/durham-investigating-non-governmental-organizations-and-individuals-potentially-including-fusion-gps

Meadows, speaking to “Fox News Sunday,” pointed specifically to a report from The Hill’s John Solomon, who found that Ukrainian businessman Konstantin Kilimnik, a key figure in Mueller’s report, was actually a U.S. informant. In his report, Mueller linked Kilimnik to Russian intelligence, and did not mention Kilimnik’s secretive ties to the U.S. in the report other court filings — even as Mueller suggested former Trump campaign chairman Paul Manafort’s ties to Kilimnik were nefarious.

And here’s a view from NBC.
https://www.nbcnews.com/politics/justice-department/new-details-barr-far-reaching-probe-spying-trump-2016-campaign-n1015871

That Kilimnik was a double-agent (at least) was the only really interesting news to rise up from yesterday’s hearing on the Mueller report, which was a bit like a seance, a kind of mediocre effort to invoke the ancient spirit of Watergate from the dead in order to haunt Trump’s dreams. John Dean did his best, and dude does have a sense of timing, as his response to Matt Gaetz showed. Ha, ha. That was a good moment!
https://www.rawstory.com/2019/06/republican-matt-gaetz-ripped-after-his-questioning-of-john-dean-backfired-florida-man-gonna-florida/

Unfortunately, Gaetz—utter shite-bucket and clown that he is— is correct about the purpose of the hearing. Don’t you just hate it when idiots make better sense than smart people? The hearing had no real purpose except to make a show without any meaning, because Pelosi won’t impeach under any circumstances. Gaetz is right about that. It’s a useless educational hearing that should be a real impeachment inquiry. There was basically no new information, no new positions, and no real goal to yesterday’s show, just as that idiot Matt Gaetz said.

There was only one real hint of the Spy vs Spy storyline in the whole hearing. But I guess Spy v. Spy is going to come into the center ring of the Circus soon. Hold your hats, folks! It turns out Konstantin Kilimnik was an asset of US intelligence the whole time he was serving as a go-between for the Trump campaign and Russia. That’s sort of a big deal, since he was one of the key contacts between Manafort and Ukraine and Russia. Kilimnik gets a lot of ink in the Mueller report. Perhaps we’ll get some new clues in what’s becoming an excellent detective story when the counter-intelligence committee holds its educational hearing on Wednesday. Will a world of double-agents and cool spy technology begin to be revealed? Not much chance we’ll get to bottom of this black hole. But we’ll be peering in, from the side.

from Mueller Report, pg 6.
Separately, on August 2, 2016 , Trump campaign chairman Paul Manafort met in New York City with his long-time business associate Konstantin Kilimnik, who the FBI assesses to have ties to Russian intelligence. Kilimnik requested the meeting to deliver in person a peace plan for Ukraine that Manafort acknowledged to the Special Counsel’s Office was a “backdoor” way for Russia to control part of eastern Ukraine; both men believed the plan would require candidate Trump ‘s assent to succeed (were he to be elected President).
Manafort had caused internal polling data to be shared with Kilimnik, and the sharing continued for some period of time after their August meeting.

So, Mueller writes: “…who the FBI assesses to have ties with Russian intelligence…” Did the FBI not know he was an intelligence asset of the US? Was Mueller lied to by the FBI, or is he lying or hiding information in his report? Or is Kilimnik a real double-agent, so Mueller wasn’t lying, only leaving out half of Kilimnik’s job description? Sounds like an interesting character for Congress to talk to, and I’m not too surprised this story hasn’t gotten a whole lot of headlines.

But this Hill article on Kilimnik opens up that can of worms pretty well for you, if you like a good spy mystery with your worms.
https://thehill.com/opinion/white-house/447394-key-figure-that-mueller-report-linked-to-russia-was-a-state-department

All them references to Kilimnik in the Mueller report now have a new, shadowy undertone, knowing Kilimnik is working for both sides.

And Matt Gaetz, idiot that he is, is right about one other thing. You know what they say about broken clocks. The hearing was a farce, and the Democrats need to begin an impeachment inquiry, or just shut the fook up and go forward on their Pelosi-path to extinction.

Here’s a Thom Hartmann interview with constitutional scholar Laurence Tribe about need to impeach and what might happen then. Tribe does not think Nadler can start an impeachment inquiry without Pelosi saying “Go.” Sad situation folks. The dinosaur Geriocracy rules. And extinction looms.
https://www.youtube.com/watch?v=8ZJ6YNxUr-k

But, according to Salon there is an outbreak of Impeachment Fever, baby. We can only hope it will spread into an epidemic. Nice metaphor! And this is a good read from Salon.
https://www.salon.com/2019/06/10/impeachment-fever-the-freedom-caucus-reaps-what-it-has-sown/

The reluctance of Democratic Party leaders to impeach Donald Trump is indicative of this incontrovertible truth. Nancy Pelosi and the mostly white party leadership is resisting the growing chorus of black voters calling for impeachment. And let’s be clear, it is a black chorus. A recent CNN national poll (pdf) shows that 59 percent of non-whites favor impeaching Trump while only 31 percent of whites do.

I’d offer to Harriot and all black Democrats that they reconsider their party affiliation. Perhaps if they left the Democrats and stepped over here to the side as independents, their votes might actually make more, not less difference, to the Dinosaur Party Leadership. Because as long as Nancy Pelosi is Speaker of the House, there will be no impeachment. And black voters, like progressives, will continue to be taken for granted.

Back in March, Pelosi effectively took impeachment out of the Democrats’ playbook. She drove me out of the Democratic Party with that foolhardy public statement. She announced to the world and to Donald Trump that she would not impeach under any circumstances, that it wasn’t important to her.

Her spoken reasons for that position were speculative, vague, and ill-formed. She said it was divisive. She said that when she was previously speaker, people in her party wanted to impeach GW Bush— the war criminal who had successfully slaughtered almost a million Iraqis, had instituted and defended a system of torture exemplified by Abu Ghraib and Guantanamo Bay, and allowed the NSA to create a nationwide spying system and begin the Orwellian surveillance that we all now live under— but she wasn’t having any of it then, and she shore ain’t gonna truck any palaver about impeachment now. No sir, Nancy Pelosi made up her mind about impeachment 30 years ago, when Bill Clinton was impeached for a blow job. She’s not changing that ossified mind at this point. No sir-ee, Siri. For Pelosi, impeachment isn’t just off the table, it’s not even on the menu at all.

And her position is a recipe for disaster. A blustering, blowhard bully like Trump just takes that as permission to do any damn thing he pleases, which is just what he’s doing, knowing that there is no possible hold on his behavior.

Nancy Pelosi won’t allow impeachment. And she loves her gavel.

For the love of a gavel. That’s how simply our democracy will end. With dinosaur Pelosi holding her gavel in a death grip while Tyrannosaur Trump rips big bites out of the dead belly of our nation. I know, I know, it’s sad, for sure. Sorry about that. Some stories just are.

But, no worries! Look, the 2020 Blue Clown Primary Fashion show is ramping up. Don’t fret that Nancy has set them on the path to failure against Trump. Don’t grieve that the progressive policies your favorites are wearing will never come to be in the Dinosaur World of Trump and Pelosi. The models are still looking pretty hot in the previews, and I can’t wait to see them in their full outfits on the walkway at the DNC Debates. The first debate is set for June 26 and 27.
https://www.nytimes.com/2019/06/11/business/media/moderators-first-democratic-debate.html

CNN is set to broadcast the second Democratic debate from Detroit on July 30 and 31. The third debate, to take place Sept. 12 and 13, will be broadcast by ABC News.

The article doesn’t mention that DNC changed the requirements for the 3rd and 4th debates, or that they have refused appeals from millions of Democratic voters to hold a debate focused on Climate Change, and threatened to punish any candidate who participates in a climate debate at all. Double-plus-WTF!! to the Dinosaur National Committee.

And you can always feel better by laughing at this Red Clown dinosaur ramblin’ ’round in his memory. At least he’s not holding a gavel.
https://www.mediaite.com/news/watch-a-gop-rep-ramble-through-his-entire-life-story-admit-voting-for-jimmy-carter-at-mueller-report-hearing/

Or you can turn away from the Circus, and take a look at the real world we are making around us. The dead zone in the Gulf of Mexico could reach a record size this year.
https://www.theepochtimes.com/noaa-very-large-dead-zone-forecast-for-the-gulf-of-mexico_2957793.html

And speaking of world records, will 2019 be the first year for an ice-free arctic? That’s a world record that we really don’t want to see set. The dreaded “blue ocean event” will signal the beginning of radical abrupt climate change, according to official “Cult of the Doomsday Scientists” high priest Paul Beckwith. This graphic depiction from NASA, not from Beckwith, suggests an ice-free arctic is coming soon.

I’m pretty sure Trump made sports betting legal in all states, right?