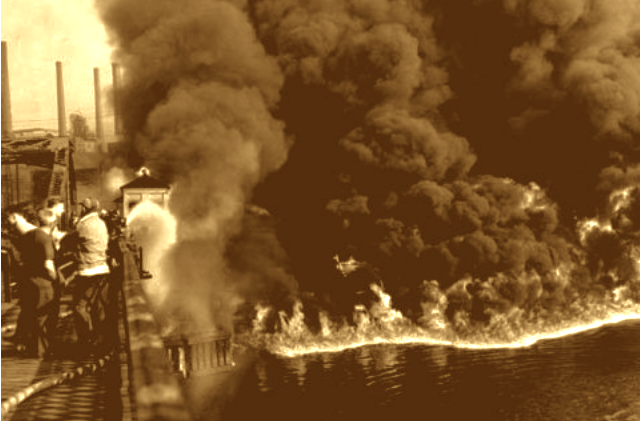 Time For A Climate Party?

Today marks a grim but perhaps hopeful anniversary, folks. It’s 50 years since the last time the Cuyahoga River, in my ancestral home of Ohio, caught fire. The spectacle of the burning river was a regular event that brought pollution to public attention and led to the creation of the EPA. The clean-up of the Cuyahoga marked an era of hope for the environment. False hope, perhaps. Will it take the whole world catching fire Bill Nye style, to make the climate crisis seem real to Americans today? Would we create a new World Protection Agency in response?
https://www.businessinsider.com/vintage-photos-of-cuyahoga-river-on-fire-before-epa-2019-6

I’m not gonna wait for that.

I’m a Climate Voter for 2020! I won’t vote for any candidate who doesn’t prioritize the climate crisis and have a real plan for the future. I’m an independent voter who cares about the environment. I believe in the science that tells us the environmental collapse is happening now, and that it is an existential threat to humanity. I believe in the science that tells us we have to make big changes in our society if we are to survive the climate crisis our civilization has created. And I believe only a US government entirely committed to this change can bring us through the crisis intact. So I’m a Climate Voter, and I’ll only vote for Climate Candidates in 2020. I’m sure there are others who feel the same way. Want to get together for a Climate Party?

It’s easy to see that the current administration— led bravely toward extinction by the Orange Party’s Climate-Denier-In-Chief— is a grave threat to the climate, to our country, and to the whole world.
https://www.sierraclub.org/sierra/trump-epa-calls-for-dirty-power-climate-crisis-accelerates-clean-power-plan-affordable-clean-energy-rule

But where is the alternative? The Democrats have some Climate Candidates, like Jay Inslee but the Dinosaur National Committee wants to turn us all into fossils. We know the path we are on, they say. Move to the middle. But this is the path to extinction. We climate voters should demand a climate debate! A strong article here from Counterpunch.
https://www.counterpunch.org/2019/06/19/the-dnc-cant-be-allowed-to-ignore-the-climate-crisis/

Virtually every state in the nation is already suffering debilitating, destructive and vastly expensive impacts from global warming. Farmers can’t plant their fields in the Midwest because they’re underwater from record high floods. Massive storms have swept the Eastern Seaboard as the raging and rising sea claims more land every year. The West Coast is fighting wildfires burning not in forests, but in scrub brush that no amount of raking or thinning will remedy. Alaska is again on fire where there shouldn’t be any fires. The Rockies are facing a host of climate-caused assaults including extirpation of native species and invasion by non-native species as they move north with the warming climate.

Washington Governor Jay Inslee has made the climate crisis a central tenant of his presidential bid, which should come as no surprise considering his state faces the environmental and economic crises from a rising and warming ocean.

But what if political change doesn’t work, like, just for example, if the Democrats push Biden through the primaries, and there’s no Climate Candidate for Climate Voters to vote for? Will it be time for massive civil disobedience? That question got me wondering where XR in the US is at these days. Well, it’s in Portland, of course!
https://www.oregonlive.com/news/2019/06/climate-change-protest-blocks-street-in-downtown-portland.html

Aside from massive civil disobedience XR style, is there any other solution to the extinction march of the Two-Party Dinosaurs?

What about holding a Climate Party? If all the Climate Voters got together into one Climate Party, maybe it would be big enough to get the attention of the Dinosaurs. The more I think about it, the more I love the idea of a Climate Party, that would combine the best elements of theater-style civil disobedience with a particular political goal: electing a Climate Candidate as President.

If a Climate Party started up, say about when the world-wide Strike for Climate begins on Sept 20th… well, just saying that sounds kinda cool, doesn’t it? And the party could go on for awhile.

I’m not much of a host for these sort of things. I’m a surrealist poet and sarcastic political blogger, Jim, not a political party organizer, for fook’s sake! But if there’s someone, anyone out there who cares about the climate and who is better at organizing a get-together of people who want to vote for Climate Candidates, I’m in, dude! Let me know what I can do to help from the side. I’ll be glad to write up the invitations!

Otherwise, it’s on with P.R. Burn-em’s Two-Party Circus, I suppose, for another day’s distraction.

Here’s a little impeachment tutorial for those who like explanatory cartoons that convey real information. Maybe this would clear things up for Nancy Pelosi, who still seems to think self-impeachment is in the Constitution.

What the fook is the WaPo doing printing editorials in favor of killing people? Wait, I almost forgot. WaPo is in the War-Whore Cheerleaders.
https://www.washingtonpost.com/opinions/2019/06/21/avoid-wider-war-iran-must-be-deterred-with-limited-us-military-strikes/?noredirect=on&utm_term=.681cadafeed4

I suppose those experiences are why he’s a war-hog douche bag. Which of these qualifications suggest he is someone who tells the truth to the public, or even to the Washington Post? Fook killers of all colors, Red or Blue or Yellow. I grew up with this Dinosaur-War thinking. I could go all back and forth with this guy about why he’s wrong, even without a shred of real information. Only fossils fight for fossil fuels, and they’re killin’ us all. It’s a little weird for the US to talk “deterrence” against Iran when we have Iran surrounded with bases. And we’re the ones who have invaded countries all around them. In the funhouse mirrors of P.R.’s Circus, everything is reversed from the truth. You have to learn to read backwards. Or just get used to it.

Like wrong names, for example. Really. When you’re living under the Geriocracy, you’re gonna get called by the wrong name sometimes. Just like your senile old, Grandpa, right? He’d be, all, like, “John, I mean, Joe, I mean Jerry, yeah, Jerry, bring me another beer.” And you’re like, “It’s me, Hopey, Dad, can’t you see?” Don’t fret it, Hope. He was just distracted. I’m sure Nadler knows who you are. And I’m sure he noticed your stunning outfit, too. Or, maybe he just kept thinking, “Lewinski, Lewinski…”
https://www.cnn.com/2019/06/21/politics/jerry-nadler-hope-hicks-lewandowski/index.html

But, of course, anybody can refuse to come talk to the Blue Clown Congress, nowadays. Who’s this Felix character I keep mentioning, anyway? Spy v. Spy stuff for the espionage intrigue fans out there.
https://news.yahoo.com/felix-sater-convicted-felon-pushed-142041523.html

So, if I’ve mentioned this before, I’m sorry about that. I’m a bit of a Geriocrat, myself, and I tend to repeat myself.

But to end for today, I’d just like to remind you all that I only do all this out of love. Love for you. Really. And out of love for this beautiful world, beautiful enough to have created you.

I do it for love
Even when love
is not enough.

And, today, that’s how it feels, from the Side.