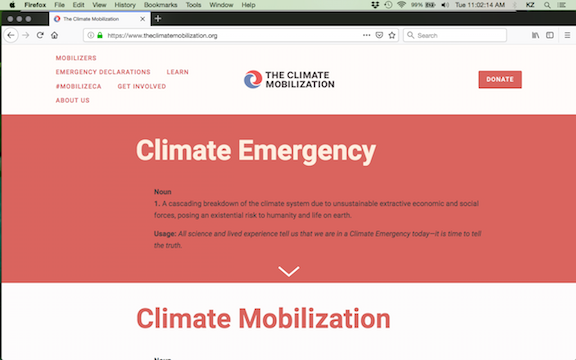 From the Side it’s clear that US mainstream media has chosen the “less truth is the best truth” solution to the epic puzzler I offered you all yesterday. At least when it comes to the urgency of the climate catastrophe.

That’s right folks, I’m saying it here, as clear as I can. The truth about climate is being hidden from you.

Foxnews.com has no stories related to climate shown on their home page. ABCnews.com has a weather story,
https://abcnews.go.com/US/hundreds-severe-weather-reports-include-tornadoes-temperatures-heat/story?id=64057504&cid=clicksource_4380645_null_headlines_hed
which describes wide-spread severe storms without a single mention of climate change.

The front page of CNN.com also has no mention at all of climate. There is a small type peripheral headline about the NYC ban on styrofoam
https://www.cnn.com/2019/07/01/business/new-york-styrofoam-ban-trnd/index.html
going into effect.

This dearth of climate news comes despite the fact that New York City recently passed a Declaration of Climate Emergency. Did you hear about that on TV? Did you even know there was a Climate Emergency? Who knew, right? You have to search GoogleNews to find a story about it.
https://www.huffpost.com/entry/nyc-climate-emergency_n_5d13cbcde4b0d0a2c0ab1eb2

But it’s true. Despite the silence of our major news outlets, we are in the middle of an actual climate emergency. And a Declaration of Climate Emergency, including powers of emergency mobilization, has been declared in New York City, joining hundreds of other cities, counties, and countries world wide. Come on, Eugene, come on Oregon, let’s show our green! We can be at least as proactive about climate as New York. Let’s follow their lead, and declare a climate emergency, too, before our forests burn down rather than after. You can watch the City Council meeting here.
https://www.youtube.com/watch?v=XPtAKjhT02s

But instead, in “green” Oregon…. we get this Koch-Krap. How about a new Ore-green Deal? How about we kick the dinosaur corporate money out of our politics and save this beautiful state in the beautiful state it’s still in? Before it’s not.
https://expo.oregonlive.com/news/g66l-2019/06/885b66848a3905/polluters-hit-by-oregon-climate-bill-gave-big-koch-industries-was-one-of-the-biggest.html

Side Storm Report:
Freak Hailstorm in Mexico City! Holy ice fall, Batman! This looks like the Joker’s freeze-ray really works, and only the Penguin would be happy with the results. As much as FIVE FEET!! of ice on the streets. I’m dumbstruck.
https://www.bbc.com/news/world-latin-america-48821306

The authorities say 200 homes have been damaged and dozens of vehicles swept away in the city and surrounding districts.
State governor Enrique Alfaro described it as incredible, according to AFP news agency.
“Then we ask ourselves if climate change is real. These are never-before-seen natural phenomena,” he said.

Here’s one from the “Cassandra Weeps” Files:
Back in March, I made this statement to the Democratic Party leadership: “To cry out “Treason, crime, treason… but we won’t impeach.” just sounds like a lie. The fact that the Democrats haven’t impeached will become the Republican’s best weapon. Even losing an impeachment fight will give you more chance to win in 2020.”

Now, true to form, the Republicans have already begun using this obvious defense of Trump. Every attack on the sitting criminal from now on will be open to this obvious and sadly effective response. “If he’s so bad, so dangerous, so treasonous, why didn’t you impeach?” Answer that one, Nancy P.
https://www.foxnews.com/opinion/bradley-blakeman-if-democrats-impeachment-of-trump-is-so-urgent-why-are-they-taking-the-summer-off

Is there a way for the Democrats to win in 2020 without impeaching Trump now? I sure hope so, but I don’t see it. Can they wait through the summer? I don’t think so. Will they wait until it’s too late? Cue Cassandra weeping. It’s hard to hear through the tears, but I think she’s saying, “they will.” Wait, that is.

I’ll end for today with this one, a deeper look at the data that shows this year is heading toward a real climate emergency.

Data-geeks, this is for you. English accent dude covers the most current atmospheric and temperature readings in some detail, with lots and lots of graphs. Data analysis of temperatures for 2019. Data analysis of CO2 levels. Looks like it could be a long, hot summer. Yep, this very year. The most difficult information here for me to process is the fact that emissions are still rising, and still rising at an accelerating rate! WTF!! “Dire, dire…” indeed. No shift in the curving curve. What part of exponential don’t we understand? Double—plus-dang!!

It’s an emergency, all right. I’m glad to see New York City taking the big step of recognizing it. It’s time for others to step up.