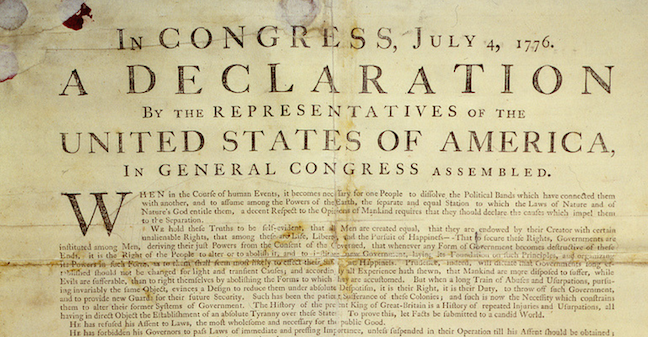 A Declaration of Co-Dependence

On July 4, I like to celebrate the Declaration of Independence, since that’s the reason we celebrate this day at all. Have you read it? I taught this little essay in almost every composition class I had the pleasure to stand in front of during my 27 years as a community college instructor. I was always surprised how few of my students have ever read the actual thing. Here it is, for your pleasure. Like all good literature, it’s better read out loud. Give it a try.

…We hold these truths to be self-evident, that all men are created equal, that they are endowed by their Creator with certain unalienable Rights, that among these are Life, Liberty and the pursuit of Happiness.–That to secure these rights, Governments are instituted among Men, deriving their just powers from the consent of the governed, –That whenever any Form of Government becomes destructive of these ends, it is the Right of the People to alter or to abolish it, and to institute new Government…

I know, I know, the Declaration is just rhetoric. It didn’t create a single thing in physical reality. It was only words, after all. It took a long war to make a new country. It has taken 250 years of struggle to begin to make real some of the ideals of freedom the Declaration declared. Words and ideas are not the thing they point toward. And we certainly have never achieved those nobles ideals that everyone is equal, that government works to secure our rights. The Declaration has never become “Truth” in reality.

But at the same time, the Declaration of Independence changed everything in our world. Its ideas of equality, liberty, human rights — and of the purpose of government being to support those rights— have become absolutely essential in own minds, in our history, and in our beliefs. The Declaration has been quoted by every revolution since. Its principles have become part of every constitution of every democracy. The meta-history of the world is a history of ideas, of memes. And the ideas of human rights and of the role of government, expressed in Thomas Jefferson’s eloquent words, have shaped the history of our civilization, in reality, since July 4, 1776.

History and reality can get in the way, sometimes, of the best ideas. It’s easy to criticize Thomas Jefferson as a man, in this meta-modern age— and rightly so, I think— for his slave-owning and for his colonialism in expanding the new USA westward. For hypocrisy. Jefferson held many of the antiquated ideas of an antiquated time.

And it’s easy to see that America has never lived up to those ideals expressed in its own founding document. America has never achieved equality and equal rights, not for men and especially not for women and people of color.

But– although neither Jefferson nor the country he helped create ever lived up to them– I still believe that Jefferson’s words as expressed in the founding document of the United States pushed forward an idea of human freedom that has never been extinguished since. “All men are created equal… life, liberty, and pursuit of happiness… that to secure these rights, governments are instituted among men…”

Those words have shaped our society for the better, as we strive to make them real. They continue to urge us to make our country more free and more just. And on July 4, I like to remember those words, to say them out loud, and to keep that ideal that we have never yet achieved in front of me as a real goal.

I totally dig the Declaration, man!

But as much as I have loved and tried to live up to the words in the Declaration of Independence, I think a new declaration has to now be added to them. The Declaration isn’t enough, anymore. The limited world view of Jefferson’s time perhaps didn’t allow him to see what we can now perceive from the vantage of history: That human liberty must be understood in the context of our existence in a limited natural world.

What’s missing from the Declaration of Independence is any idea of the rights of nature.

The right to life, enshrined in the Declaration, should and must include the right to live in a livable world. This is a right that we are taking away from our children by destroying the environment. To live up to the Declaration of Independence, we have to protect the living world, for the sake of our own rights if nothing else. And those of our children.

The right to life has to extend to the living world. The natural environment has a right to life, separate from our own. (The reference “Nature’s God” in the Declaration might cover that if we understood the non-human world as issuing from the same source as our human world. Thus ‘nature’s god’ would naturally grant rights to nature, too, right?) And– by the great happy coincidence of the universe– granting the right to life to nature will also ensure it for ourselves.

So I’d like to offer the idea of a Declaration of Co-dependence With Nature, a declaration yet to be written, but only imagined, this morning, as I’m jotting down this column.

In my mind, that Declaration of Co-dependence would contain the following elements:

First, there would be a statement of Natural Rights, something along the lines that the non-human world has a right to exist, a right to life, liberty, and the pursuit of its own happiness, as much we humans do. This fundamental right of nature to exist is essentially what Aldo Leopold proposed as “The Land Ethic”.

Second, I’d offer a statement of co-dependency, describing the relationship of humans within Nature, stating that because we need the non-human world to survive, because we are co-dependent on nature for our own survival, we have a duty to protect the rights of nature as we would protect our own rights. That, in fact, in granting rights to nature we are acting to protect our own rights, and the rights of future generations. We will all benefit from giving the right to exist to nature, in the same way we benefit from giving rights to each other. Most importantly, we have a duty to future generations, with which and upon which we are co-dependent as well, and that duty includes the duty to provide them a livable, abundant natural world.

Finally, like the original declaration, I’d end with a long list of infractions against the rights of nature and of future generations we are currently committing that must be stopped. That could get to be a pretty long list!

Yes, it’s a win-win situation, folks. A Declaration of Co-dependence would protect us all. Or at least it would be an idea about protecting us all that could help coax us to actually do something to help the environment. It would still be up to us to make it real.

What these Natural Rights would look like is still an open question to me. Heck, we don’t even know what equal rights for humans should look like, yet. That “right to life” is likely best understood at an ecosystem or bio-regional level. That is, we would be granting rights to something bigger than ourselves.

I’d love to hear your thoughts about a Declaration of Co-Dependence. Maybe we could begin a draft together…

As I mentioned yesterday, after posting 100 continuous days of new Views from the Side, I’ll be taking a vacation for a couple of days. The next three days’ columns, which I’ll call Re-View of the View, will be re-posts of parts of the earliest editions of View from the Side. You can get caught up on the origins of this surreal and seemingly endless windmill-crusade of a blog, and think for yourself about a couple of the main themes I’ve been pursuing, while I pursue some big trout with my fly rod. I’ll return in real time on Monday, July 8.

Of course, the climate crisis won’t be taking any vacation. Here are a few fresh links to keep you thinking.

For example these torrential rains in Japan.
https://www.reuters.com/article/us-japan-weather-idUSKCN1TY05N

Big heat in Alaska is setting all times records.
https://weather.com/safety/heat/news/2019-07-03-anchorage-alaska-all-time-record-heat-wave

While CNN asks “Are parts of India getting too hot for humans?”
https://www.cnn.com/2019/07/03/asia/india-heat-wave-survival-hnk-intl/index.html

Will the DNC allow a climate debate? Here’s some questions for such a debate, were it to occur, from Vox.
https://www.vox.com/energy-and-environment/2019/7/3/20678520/democratic-debate-2019-climate-change-dnc-questions

While I’m gone, you can search Google News for yourself, if you want to see what the mainstream headlines won’t show you.
https://news.google.com/search?q=climate%20crisis&hl=en-US&gl=US&ceid=US%3Aen

And, as a last link for today, I’m glad to see this one. Justin Amash is leaving Republican party. Amash was the first Republican to speak in favor of impeachment. Now, it looks like he’s starting to see the Circus from my side.
https://www.cnn.com/2019/07/04/politics/justin-amash-leaving-gop/index.html

“Today, I am declaring my independence and leaving the Republican Party,” Amash wrote in a Washington Post op-ed Thursday morning. “No matter your circumstance, I’m asking you to join me in rejecting the partisan loyalties and rhetoric that divide and dehumanize us. I’m asking you to believe that we can do better than this two-party system — and to work toward it. If we continue to take America for granted, we will lose it.”

“The two-party system has evolved into an existential threat to American principles and institutions.”

He sounds a bit like I did when I similarly left the Democrats. The two-party system really is the problem, and Amash is right about that, just as he is right about impeaching the criminal president. I hope he does run for President. He’s certainly better than Trump, which is the main qualification most of the Democratic candidates seem to be putting forward. As an independent voter, I’d certainly consider him. I’ll bet Amash doesn’t even know that tomorrow is Independents’ Day.

As a Climate Voter, though, Amash is going to have to wise up to the climate crisis before he can win my vote.

I’ll see you on the other side, when the morning comes.