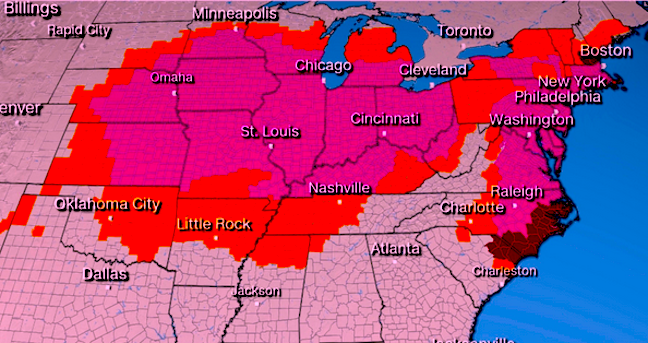 It’s not just a heatwave, it’s a heat-tsunami! It’s washing over 85% of the United States this weekend. And it’s gonna kill a whole lot of people. Heat waves are nothing to scoff at; they cause more deaths— especially of older, younger, and already ill people— than any other weather phenomenon. And they can have the same effect on other species as well. You can track the current heat-tsunami live on CNN.com.

This heat-tsunami is even melting the Iron Men and Women of New York.
https://www.cnn.com/2019/07/19/us/heat-wave-new-york-triathlon-canceled-wxc/index.html

I have to pause for a strange confession at this point. It makes me sorta sweaty when HuffPost gets all click-bait with their alliterative, over-stated headlines. I know, I know, that’s weird, but we all know what we like, right? This article’s link and headline blare, “Hellish Heat Grips Half the Country”. Heck, I could have used that myself, here on the Side, but “Heckish Heat” just doesn’t have the same ring to it. And the Huff editors could have thrown a couple exclamations marks in, you know, for effect!!

But what Huffington Post does here that others don’t is connect this current heat-tsunami to the climate crisis. And that’s important.
https://www.huffpost.com/entry/heat-wave-climate-change_n_5d31d7a2e4b020cd9942bb98

“If we continue to burn fossil fuels, pump carbon dioxide into the atmosphere and warm up the planet, we are going to see more prolonged and more extreme heat waves,” Michael Mann, a climate scientist at Pennsylvania State University, told NBC News this week. “That’s playing out now in real time. We saw that last summer. We’re seeing that again this summer.”

This is the important point. Let me repeat it, because, well, some things are worth repeating, right?

Climate change means more prolonged, and more extreme heat-tsunamis. And that means more discomfort, more displacement of populations, and more deaths of humans and other species. Until we stop burning fossil fuels, all of this will get worse. What should we do about it? 2 plus 2, folks. The simple truth is we have to stop using fossil fuels or we will continue to suffer greater and more punishing heat-tsunamis.

Until that simple truth is emphasized by the press and the government, people won’t push for the changes we need. Climate Denial Syndrome can only be broken by open truth. And that is largely up to the press. Kudos from the Side to HuffPost for saying it like it is. With style!!

In this video from a few weeks ago, Cult of the Doomsday Scientists high priest Paul Beckwith, a climatologist and specialist in Arctic ice loss, explains the connection between the overall trends of global warming and the heat-tsunamis, which have so far just this year swept over India, Europe, Alaska, and now most of the continental US.
https://www.youtube.com/watch?v=awnHOZ_zH6M

A heat-tsunami is often accompanied by other severe weather. This one has delivered a damaging wind-storm, a so-called “Derecho”, which whipped across three states. The continued burning of fossil fuels will bring us even more destructive events like this. Better get ready for some heavy weather, folks.
https://weather.com/storms/severe/news/2019-07-19-severe-outbreak-upper-midwest-forecast

Yes, it’s gonna be a long, hot summer, and under the Big Top of P.R. Burn-em’s Two Party Circus, things are staring to really cook! The impeachment show hasn’t cooled off yet. And with Robert Mueller coming into the center ring next week, I imagine the proud 95 are going to be joined by a whole lot more, as the temperature rises around the Trump Bunker.

Here’s an excellent article from The Nation praising the brave 95, who stood up against this racist, imperial presidency.
https://www.thenation.com/article/trump-racism-impeachment/

So why do Nancy Pelosi, the Dinosaur National Committee, and other corporate conservative Democrats keep fighting against impeachment? Why do they insist on sleep-walking their party down the path to Extinction?

This segment of The Rising from The Hill gives some pretty interesting insight today into the thinking behind the DNC strategy. I’m glad the host Krystal Ball gets the last word in, since conventional wisdom lady who works for the DNC gives a compelling if totally wrong statement about moving to the electoral “middle”.
https://www.youtube.com/watch?v=_UR6Rkq1Yxs

What none of the commentators say is how many voters the Democrats have already lost to what is called “the left”. Meaning, of course, voters like me. What the Democrats have refused to consider in their long shuffle toward “the middle”, which is really just moving toward the Republican position, is that the entire Green movement from 2000– which certainly cost them that most important election– while it didn’t coalesce into an effective political party, became disaffected with the Democrats and their middle-of-the-road strategies. Those “far-left” voters now vote only erratically for Democratic candidates, if they vote at all. These middle-of-the-roaders think they have guaranteed environmental and progressive votes when, in fact, they have lost many of them. Of us, I should say, from the Side.

And Democrats of the DNC-Nancy-Pelosi-Corporate mindset also don’t think about new voters, young voters, who haven’t yet decided on what for many of them will become a lifetime party affiliation. Young voters are looking for energy, for passion, for a sense of direction. And they are looking for candidates who will protect their future by protecting the climate. AOC and her crew have a public following not just because they know how to use digital media. They have spunk, they have passion, they have vision. And people respond to that.

And that’s the lesson that centrist, moderate, conservative Democrats have yet to learn. When the times are changing, the party that changes with them will come out on top. Refusing to change is choosing to lose. It’s Dinosaur thinkin’ and it leads nowhere but extinction.

Here’s a closing metaphor for you. You could think of middle-of-the-road Democrats as middle-of-the-road drivers. You know who I mean, right. WTF are they doing straddling the white line, taking up two lanes, you think, as they come toward you on the road? All the traffic is veering around them; they’re causing accidents all over the place. Yes, these middle-of-the-road-Democrat-drivers are driving us all off the road into the ditch. But the last place to turn away from that cliff up ahead is right here, right now, turn….!

Whew, that was a close one. I guess I made it off to the Side of the road, just in time.