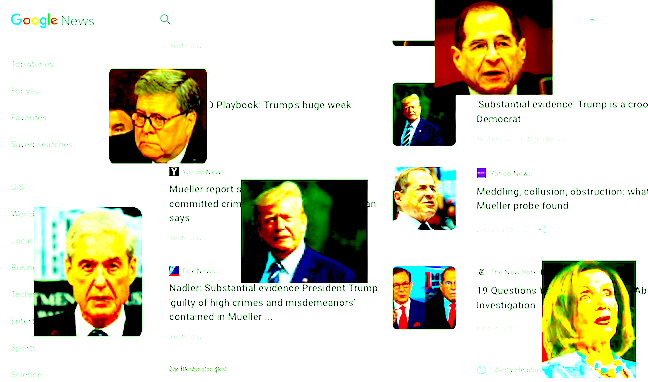 A lot of opinions and predictions and warnings are flying around the media-sphere this morning, with faces of the competing figures adorning the headlines. Mueller is coming, baby! Better hide your hearts and redact your reports. He’s gonna speak to Congress, in person, under oath, this Wednesday morning. Unless something— like an act of god or a sudden intervention of the Supremes intervenes. Everybody thinks they know what’s gonna happen, and I can’t say they’re right and I can’t say they’re wrong. Only Cassandra can say, and she’s kinda quiet today. She’s been smiling, though, and looking strangely happy. But she won’t say why. She always knows what’s comin’, and she’s learned to keep her heart hidden.

Here’s a taste of the chaos for you, as selected by Google News. Dig through for a while to get a sense of the mess of guesses going on out there. Yours is a good as theirs, and as good as mine, friends. Let me know what you think about Mueller’s testimony in the comments.
https://news.google.com/stories/CAAqOQgKIjNDQklTSURvSmMzUnZjbmt0TXpZd1NoTUtFUWpaenFlSmpvQU1FVDRTSHNyRUNyd29LQUFQAQ?hl=en-US&gl=US&ceid=US%3Aen

From the Side, I’m gonna admit I have no clue what will happen on Wednesday. I can only see the drawn swords of the Blue and Red clowns who are facing off in this strange combat with the old cowboy Mueller stuck in the middle with the truth. It looks like a big-time fight is brewing. And the one prediction I’m willing to make right now is that it’s gonna be an ugly bloodletting on both sides. Or all three sides, I suppose, because Mueller has a side of his own, and that’s the hardest one of all to guess.

Pistole said he expects Mueller to be “as unresponsive as possible, while telling the truth. I think his first approach will be, ‘Read the report and form your own conclusions.’ He’s no longer a government employee, and he can tell them to pound sand, not that he would use those words.”

But the Post won’t mention that Mueller lied to Congress before, in arguing that Saddam Hussein had weapons of mass destruction. That little fib helped bring about the Iraq War and all that followed. But is the past always prelude?

Well, they say opinions are like arse-holes, and everyone’s got one, including me. So how’s the face-off looking from the Side? First of all, it’s important that Judiciary chair Jerry Nadler has yanked his rusty blade from its sheath and laid it on the table before the hearing even begins. He used the words “high crimes and misdemeanors” to describe the Mueller report’s evidence on Trump, and that language comes from one place only. Jerry must have been reading his Constitution. He just slapped a big ol’ impeachment threat down on the table under Nancy Pelosi’s nose. Nadler has set the stakes right to “all in” for this hearing.

And the Repubs are going to respond in kind. They’re going to go after Mueller on the grounds that his investigation was biased. You know the Repubs cheat whenever they can, and their swords have a little national security poison spread along the edges, in the form of some really important info Mueller left out of his report. Just the small matter of a few embedded government agents or informants among Trump’s Russian contacts. (name of Kilimnick, Sater, maybe others…) Some under-the-counter counter-intelligence is going to be used to counter the Democrats claims of over-the-counter crimes by Trump and crew.

I’m afraid Mueller may get blasted by Investigate-gate ™, before he gets much chance to point a six-gun at Trump. And I’m guessing a good bit of his testimony is going to go behind some classified curtains.

I sure wish Kamala Harris was going to be asking Mueller some questions, instead of the Blue Congressional clowns. She’d cut through the bullshite for sure. I’m not sure Nadler and his crew, or even Adam Schiff in Intelligence will have a sharp enough sword to poke through the shield Mueller will undoubtedly have around himself.

Harris’d come up with something a heck of a lot better than this boring list of questions for Mueller from The Hill.
https://thehill.com/policy/national-security/452647-10-questions-for-mueller

Here’s the thing, folks. I’ve said it before. Mueller’s report– which unlike many folks in Congress, I have actually read– lists a number of impeachable offenses including “high crimes”, and more crimes are very likely hidden under the redacted sections that I haven’t seen. There’s really no need for Mueller’s verbal testimony. The House already has all the evidence it needs to begin an impeachment inquiry.

Only weakness and cowardice hold them back. And Nancy Pelosi, who as House Speaker embodies both of those failures.

This will still be true, whatever happens with Mueller’s testimony.

It comes down to this. Impeachment is not Mueller’s call, Jerry. It’s yours. You are the fookin’ chair of the fookin’ Judiciary Committee of the fookin’ House of Representatives, dude. Muscle up and get that shite done. We need you, man! A lot more than you need Nancy Pelosi.

Salon reprints this article from The Globalist, which says Pelosi must go. For a lot of the same reasons I do.

But what the Democratic establishment fails to understand is that these young women and the diverse freshmen colleagues of theirs are the reason for the current Democratic majority in the House of Representatives.
Not only did young and diverse voters turn out in November 2018, they also ran for office. They are the reason why Nancy Pelosi has become — once again and frankly once too often — Speaker of the House.
Without their passion and their enthusiasm not just in blue states, but especially in swing states, the presidential elections in 2020 will likely be lost to Donald Trump and the House will return to the gerrymandered Republican majority

But, let me equally clear: If Joe Biden or Bernie Sanders become the nominee of the Democratic Party and if Nancy Pelosi and her “experienced” friends continue their assault on real change promoted by fresh, young minds, I will not vote on Election Day in 2020. Enough is enough.

Um, all righty, then. Are you listening, Nancy?

If you want to learn something new today, this video might have it. The question is, “How do we stop Climate Denial Syndrome… in scientists?” Cult of the Doomsday Scientists leader Stuart Scott interviews founding Cult member Peter Wadhams.

And that’s it for today, from the Side. I’m heading out to hide my heart somewhere. ‘Cause Mueller’s coming, baby. Better get ready. Just in case.