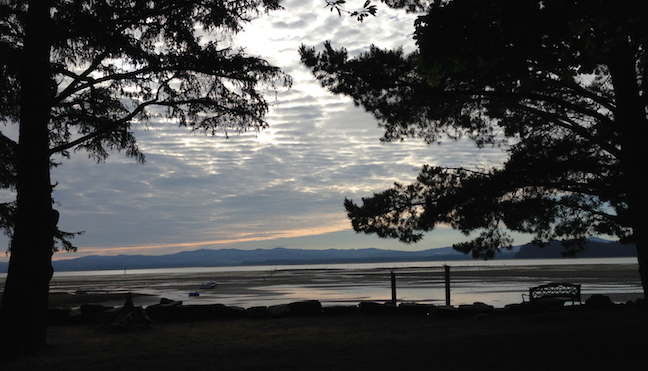 I had my first first-hand look at climate-change devastation this weekend. It hurt. And it’s a little hard to write about.

I visit the Long Beach peninsula in Washington State once a year– a little wooded property on the Willapa Bay side of the peninsula– for a song-writers workshop and retreat. It’s my fifth year going there, and I’ve come to treasure the experience in every way: the people and the learning, the songs and stories, and the lovely landscape itself. There’s a rich and complex beauty in the big trees and thick undergrowth covering the sandy ridge line, and in the long tidal shoreline appearing and disappearing twice a day. The quiet, but endlessly rippling waters of the bay, the gentle waves against sand. Birds of all kinds: great blue herons and the gulls and eagles over the water. Chickadees and sparrows and hummingbirds in the thick bushes around the buildings and paths. Cabins tucked away in the woods. The clearing where the campfire burns late into the night. And of course, the sound of voices and instruments blending together into beauty.

The big spruce trees of the coastal rain forest give a different feel to the woods than I’m used to farther south in Oregon. I like their scaly bark, their thick spreading branches, and their soft wood that flames up so bright in the campfire. So, arriving on Wednesday afternoon and pulling down the gravel drive, I noticed right away that many of the big spruce trees on the now familiar land were dead or dying. It struck me, but then in the warm wash of greetings and hugs the thought dropped away. I walked up the mossy path and set up my tent.

Later that evening, around the campfire, the subject of the spruce trees came up. Betty Lou, one of the local residents who also participate in the camp, explained what was going on. An aphid species– always part of the spruce ecosystem– had abruptly started to kill off the spruce trees across the entire peninsula. She went on to say that a multi-year drought, low-grade but persistent, had weakened the trees. Then, a few winters without a hard freeze, which would usually kill much of the aphid population, had combined with the drought to set up this very sudden and deadly infestation. She expressed some hope that a cold winter, perhaps some extra rain, would slow down this die off. She didn’t look very hopeful, though.

The next day, I took an afternoon walk out across the peninsula to the ocean side. At this point it’s only a mile and half or so along Joe John Road to the sandy beach. Along the way I passed a patch of very large spruce trees, some five or six feet in diameter. I’m not sure how old that would make them. I noticed one or two of them were still mostly green. All the rest, even the biggest, were already dead or clearly in severe distress.

I reached the sea shore and looked out for a while across the endless ocean, very calm that day, at the lowest ebb of the tide. I walked back to the camp feeling a deep sadness, noticing the dying trees all along the way. All this had come about in just one year. I felt in my bones, for the first time, the hard, inevitable truth that sudden and irreversible climate change is upon us. Now.

And a part of my sweet paradise is dying, possibly forever.

That night, I sang Extinction Song— which I wrote on that land the first year I came there– for the group around the campfire.

I’m reminded, today, perhaps stronger than ever, that if we hope to preserve this world then we need to have a climate change president, beginning in 2020, which is already late.

And the only candidate, so far, who I can truly commit to vote for is Washington State Governor Jay Inslee. If you care about the climate, and want to keep it in the center of the Democratic Primaries, please donate now to Jay Inslee, so that he can continue his campaign to save the world.

Back to the Circus

But, enough of all that seriousness for now. I’ve been away from the Show for a while. Let’s take a look into the Big Tent and see what we see.

Oh, it’s getting epic in the center ring of P.R. Burn-em’s Two-Party Circus, folks. The Side has been on another vacation, and so much has happened since last week. Let’s get caught up a little….

As I was getting ready to leave last Wednesday, I listened to Robert Mueller refuse to answer questions for one of the longest stints of answer-refusal I have ever had the displeasure to experience. Not much new there. His disdain for a Congress unwilling to do their job showed all over him. And, no, he wasn’t going to give them anything more than he wrote in his report. Did you all watch or listen to him? Let me know what you thought of his performance below.

But, as piss poor of a show as it was, it put impeachment back in View. And I thought for a moment that Nadler might come through. I thought the Democrats might grow some spine, and I might even be able to rejoin that old party of mine.

But instead, holy color-swap, Batman! It looks like Nancy Pelosi is no longer the leader of the True Blue Democrats in the House. Instead, she’s become the leader of a new group of clowns in the ring. Their costumes are no longer blue, but instead a pale, orange-gray color. Like if you take a Blue fabric and dye it with the dark green tint of cash combined with a deep crimson the shade of blood until it turns a rusty Orange like Trump’s hairpiece. But then you launder it like crazy and throw in just a touch of yellow until it’s a faded sunset-gray, sort of like Nancy’s hair dye.

Yes, Nancy’s new Party’s color is a kind of rusty-gray that I’ll just call Rust. And, for simplicity, I’ll label Nancy Pelosi’s new Appeasement Party, in their bloody-green-yellow-blue outfits, the “Rust” team, now stirred up in a complex stew of clowns out there in the ring. Old Blue and Ancient Red Dinosaurs, along with lean New-Green-Dealers and squinting Orange Nazis (yikes, did I just write that?) and their Orange Clown-in-Chief. Pelosi’s Rust Party is an off-shoot of the Democratic conservative wing, and they, like her, are a quisling, compromising, ineffective new party, who want nothing more than quiescence and compromise. Who are willing to kowtow to the Orange Clown in order to survive and maintain order, while allowing his egregious and rapacious policies to continue unchecked or balanced.

From the Side, I say, Fook those bloody Rusters and their Appeasement Party Speaker Nancy Pelosi.

The Rusty Appeasement Party members are identified by one shared trait. They oppose impeachment. Any Democrat who opposes impeachment at this point is nothing but an appeaser, an enabler, a quisling, a traitor to Constitution and country, and a betrayer of their sacred oath. You can tell the Appeasers by their tendency to shout loud insults at Trump while using the code phrases “hold him accountable” and “no one is above the law”, but then doing nothing to actually interfere with Trump’s ongoing high crimes and misdemeanors.

This is perfect for Trump. He loves to be insulted (pissed on, one might say) because that means his opponents are weak and have stooped to his own level. Pelosi is Trump’s perfect opponent, because she is a natural appeaser. She’s happy to piss away at Trump without doing a single thing to actually hurt him. He has used and abused her pretty badly until she is not much more than his puppet at this point.

In fact, now that I think about it, that jerky quality to Pelosi’s hand gestures could be the result of invisible strings attached from above. She looks a bit like a puppet when she speaks, doesn’t she? As she spouts her empty words and illogical arguments that end up supporting Trump’s ends rather than effectively opposing them? Can’t you almost see the glint of the strings as the light accidentally catches one for a moment against the dark curtain behind her? Yes, here it comes. It’s a Nancy Pelosi Puppet Show, folks! This one’s gonna be good.

Puppet Pelosi and the Appeasement Party. Look for more for in tomorrow’s Side, as we also get ready for the second session of the Blue (and now Rust-colored)-Clown Primary Fashion Show.

As a teaser, here’s a little bit of “Puppet Pelosi Smacks Nadler with Her Silver Gavel.”
https://www.politico.com/story/2019/07/24/pelosi-nadler-rebuff-impeachment-mueller-hearing-1432925

And, more treats to appease you until tomorrow! Here’s a little confusing news for you, a few conflicting reports from Red and Blue sources about whether or not the Appeasement Dems will fight off the rising True Blues who are willing to stand up for the Constitution. Make what you can of it. You know what I think about that.

Enough confusion for today, folks. I’m still sweeping up a little, from the dust this Killer Asteroid kicked up as it raced by us. Whew, that was a close one! Blew right through the living room. I’ll be back here on the Side with more for you tomorrow, when the morning comes.