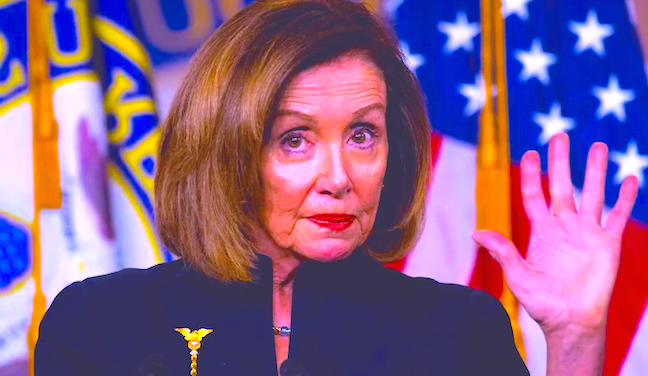 Parody of a Parody

Dang it! I didn’t want to do this. But I just can’t help it. My first, and I hope last link to The Onion. Don’t get me wrong. I love The Onion. I mean, I fookin’ worship The Onion. But I’ve got a responsibility to keep real news separate from parody over here on the Side. Hypernormalisation is serious business, you know. Things are weird enough without being confused about what’s real and what not, right? My approach is straightforward: I link to the news; I write the parody. If I said what this article said, it would be sincere. When The Onion says it, it’s parody. Got that? Just so we’re clear. What The Onion says here may be true, even though it’s made up.

“They mean well, but if they continue to aggressively push their agenda like this, they run the risk of fundamentally altering the public’s perception of Democrats as bumbling, feckless chumps,” said Pelosi, adding that this brash brand of politics could be easily manipulated by Republicans to paint the party as something other than a bunch of sniveling wimps who are too weak-willed and complacent to stand up for anything with even remote political risk. “I understand where these groups are coming from, but while it might feel good to vent their frustrations about the state of the country, they could undermine what I believe should be our core 2020 argument: We are dithering, incompetent doormats who are infinitesimally less objectionable than our opposition.”

So, would it be a paradox, then, if I wrote a parody of a parody? Like a shadow of a shadow, like a mirror facing itself? Perhaps I could do a “The Garlic” piece, in which I parodied the parody of The Onion. I can imagine it now, writing a serious parody of a comedic original story, perhaps reaching back to folk tales instead of current news. I could call it “The Perils of Puppet Pelosio” or something like that. It would be a sort of reverse Pinocchio story, in which the main character, a person at first, slowly turns to wood and wakes up one day realizing she has become a puppet. The lying and nose-growing part could even stay the same. And the ending? Well, a parody reverses things, so I guess this story doesn’t have a happy ending. More like a Rod Serling, Twilight Zone type of thing where the main character named Nancy Pelosio comes slowly to the realization that she has no control over her actions any more (which is a metaphor, dudes, for not being able to change your ideas), and then wakes up one day to see strings coming from the backs of her hands. She is abruptly jerked upright, revealed as a marionette in a puppet theater. The strings rise up into darkness. Her puppet hand picks up a puppet gavel, and– above a faint and fading scream which sound effects tell us is completely silent– a voice-over says “I guess it’s time that this story ends, folks, so that the Puppet Show can begin,” and the TV screen fades to black.

I’ll have to write that one some day…

Oh, what the heck, since I mentioned TV, and since I’m doing things I don’t normally do this morning, let’s link to a little TV, too. Via YouTube, anyway. I’ve gotta admit, for a mainstream station, CBS News does a pretty good report here on how climate change is devastating the farmlands of America. These farmers keep talking about “getting back to normal”. It’s sad, really. There’s no way back to “normal” now that we’ve said “So Long, Stationarity.” A good piece from CBS News.
https://www.youtube.com/watch?v=PiLeu3qc7fI

Hey, check it out! According to this handy little tool, also from CBS News, the number of Representatives openly favoring impeachment has grown to 105. The shift is steady and reaching the tipping point. I’m happy to notice that Peter Defazio is now on this list. Finally, Peter has seen the light! Big kudos to you, Peter, from the Side. Changing one’s mind is always hard, and you are showing some real courage with this move against Pelosi.
https://www.cbsnews.com/news/impeach-trump-tracker-representives-calling-for-impeachment-inquiry-democrats-independents-republicans-house/

What’s important to remember is that these are the Reps willing to speak openly in favor of impeachment, despite their fears of Nancy’s Silver Gavel coming down on their heads. The tide is still turning, and the rest may follow along soon.

All right, here come the links.

This is cool. I’ve been hoping Greta would make it to the States somehow.
https://earther.gizmodo.com/greta-thunberg-is-sailing-carbon-free-to-the-un-climate-1836790652

This is not so cool. When the Dems talk immigration issues during the debates, I wonder who will bring this up. Maybe Jay Inslee.
https://www.theguardian.com/global-development/2019/jul/29/guatemala-climate-crisis-migration-drought-famine

This will be interesting. Climate change Town Halls on CNN and MSNBC. I thought the DNC said candidates couldn’t participate in such events. Maybe since it’s not a “debate” it doesn’t count. And why no climate debate, again?
https://www.democracynow.org/2019/7/30/headlines/cnn_and_msnbc_to_host_climate_crisis_centered_events

Even if I haven’t fallen in fully behind Steyer for president, I gotta say I’ve been a fan of his strong stand on impeachment for quite a while now.
https://thehill.com/homenews/campaign/455061-steyer-on-impeachment-do-the-right-thing-and-do-it-now

Reason to impeach, rather than wait for the election.
https://www.newsandguts.com/senate-intel-report-says-russia-was-in-a-position-to-change-voter-data-in-2016/

And, for some intrigue there’s always the Mysterious Mr. Mifsud. This is some Spy-gate stuff, detective fans, Mifsud being only one of several mysterious characters in the strange tale told in Mueller’s report.
https://thehill.com/opinion/judiciary/455002-the-mysterious-mister-mifsud-and-why-no-one-wants-to-discuss-him

Looks like Harrison Ford is in the Rebellion. The Extinction Rebellion, that is. This speech is well worth five minutes of your time.

So, tonight is the first half of the second round of the Blue Clown Fashion Show. It’s always a little disconcerting at this type of event to see the models strutting the runway suddenly turn and begin punching each other. But that’s just part of the fun in P.R. Burn-em’s World. Beauty, intelligence, and gladiatorial combat skills are all just part of the mix in this Beauty Pageant for the ages. Yes, it should be a good show for the next couple of nights in the Center Ring of the Circus.

In the first round of the Fashion Show, climate change lost badly, being largely ignored by the candidates who are, honestly mostly ignorant about it. The ignorant tend to ignore what they are ignorant of, right? If they don’t do better in that respect over the next two nights… well, let’s just say we’re all fooked for sure, man. And the Side will need to decide if it’s finally time to give up hope for the Rusty Dems, join the Rebellion, and go all Green, all the time.

Should be some show. From the Side.