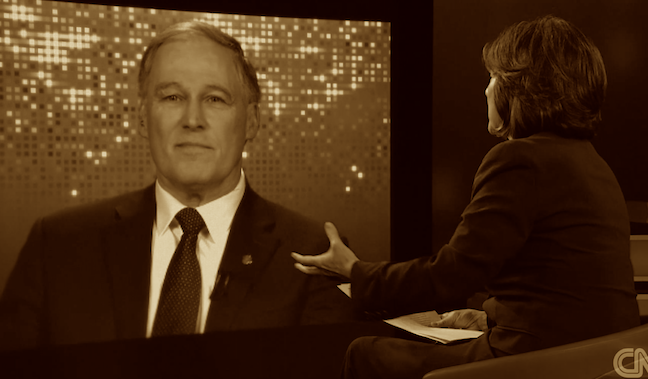 Oh, what, oh what, are you Democrats going to do? The fork in the path looks clear, the directions are very different, and the results will produce completely different Americas come 2021. The conservative wing of the Dems wants to go the Pelosi path to extinction. The progressives want to make real change in areas of health care and immigration. And Jay Inslee wants to do what’s necessary to save the planet. Which path will the Democrats choose? That’s the real drama of this Primary Fashion Show. And this second round on the runway clarified what the three paths are, if not what the poor confused Dems will do. Oh, the hair-pulling and hand-wringing to come. We’re gonna have to listen to it all summer long.

“Those pesky progressives,” the Rusty Pelosi-ites will say. “I wish they’d just shut up about change and stuff.” “Those Dinosaur Democrat Conservatives”, the Green New Dealers will shout, “are on the path to extinction!” (They sound a lot like me, when they say that.) With so many candidates to choose from, the Dems face some tough choices, I suppose, though I sometimes wonder why they make it so hard on themselves.

For an Independent Climate Voter like me, it’s an easy call. Save the planet, you dumb-fooks! WTF matters more than that?

So, with that in mind.

The Winner Is Inslee!

Jay Inslee stood out from the group in last night’s debate. Along with Warren and Sanders the first night, he was the candidate who stood by principle, who spoke on issues and never attacked the others.

Cenk Uygar from the Young Turks thinks Inslee was the winner of the debate Wednesday night, too. Good call, Cenk! With words like “statesmanlike” Cenk praises Inslee’s poise and readiness to take on Donald Trump. The Democrats are really missing the boat if they don’t keep Inslee on the stage for the next round of debates. Inslee makes the Democratic Party look good, while the rest, with their petty in-fighting, make the Democrats look bad. Inslee rises above the fray, with his focus on the one issue that is “existential”. We can argue about the rest of it, after we preserve a world for us to live in. If we don’t handle climate change, the rest of the issues won’t matter much, will they?
https://www.youtube.com/watch?v=e-91GoUdg8A

You can join the Inslee campaign here. He needs contributors to make the next round of debates.

Here’s a strong opinion piece by Inslee from CNN.com
https://www.cnn.com/2019/07/31/opinions/jay-inslee-2020-witnessed-climate-change-devastation/index.html

I’ll vote for Jay Inslee if he’s on my ballot. I’ll almost certainly vote for Warren or for Sanders if either of them is the nominee. Still to be determined are Buttigieg, Castro, Booker, and Harris. I have doubts about them all. Williamson could be my last resort protest vote. I won’t ever vote for Slow Joe Biden, or for Bennet, Klobuchar, Delaney, Gillibrand, Hickenlooper, or Yang.

Cory Booker got big points from the Side last night for actually using the seemingly forbidden word “impeachment”, and bringing that most important issue to the forefront.

And Slate picks up on Julian Castro’s comment during last night’s debate, in which Castro makes the argument I have been making since I left the Democratic Party last March. Not impeaching Trump gives him his most potent weapon for the campaign. Thanks, Julian! You’ll stay in my Power Rankings top ten because of this comment.
https://slate.com/news-and-politics/2019/08/julian-castro-makes-the-case-for-the-impeachment-of-donald-trump.html

And, in fact, I think that folks are making a mistake by not pursuing impeachment. The Mueller report clearly details that he deserves it, and what’s going to happen in the fall of next year, of 2020, if they don’t impeach him, is he’s going to say, “You see. You see. The Democrats didn’t go after me on impeachment. And you know why? Because I didn’t do anything wrong. These folks that always investigate me—they’re always trying to go after me. When it came down to it, they didn’t go after me there because I didn’t do anything wrong.” Conversely, if Mitch McConnell is the one that lets him off the look, we’re going to be able to say, “Well, sure, they impeached him in the House, but his friend Mitch McConnell, Moscow Mitch, let him off the hook.”

So, here they are, folks. With a fanfare of trumpets, and a cool video of spotlights swirling against the sky, a deep announcer’s voice intones:

1- Jay Inslee: He was the clear winner of his night on stage, for me and Cenk Uygar at least, staying on message, and remaining statesman-like, above the fray. He’s the only candidate who prioritizes climate change; he’s the only one with practical experience implementing new energy infrastructure. He has a great record of success in Washington State. He showed he isn’t a single issue candidate. And he has appeal to working class and independent voters. He will stand up excellently to Trump. He’s your guy, Dems. Don’t miss your best chance, here.

2- Elizabeth Warren: Clear, strong, smart, fierce. She’ll mop the floor with DT’s hairpiece. My leaning toward Warren over Sanders is based on some sexism on my part: I’d just rather see a woman president, if all else were equal. I also think she is marginally more electable than Bernie, only because her negatives aren’t quite as high. But it’s very close to a tie, here on the Side, between Liz and Bernie.

3- Bernie Sanders: Because Bernie showed he still has it. He came back in this debate from a lackluster showing in the first round. He’s a populist with real appeal. He’s got a proven record. He can win against Trump. And he’s becoming clearer and more outspoken on the importance of the climate issue.

Below this line, I have doubts about whether these candidates can defeat Donald Trump, especially an un-impeached Trump. An impeached and wounded Trump will be an easier target for any Democratic candidate.

4- Cory Booker: Cory Booker has a lot going for him, and some strong negatives, too. He’s jumped in my rankings mainly because of his strong stance on impeachment and his nod toward Inslee on the matter of climate.

5- Tulsi Gabbard: Gabbard’s strong anti-war position makes her a favorite of the Side. Unless the military/industrial complex is held in check, no change a Democratic president makes will have any effect. Tulsi understands this, and focuses her campaign on it. My new dream ticket has Inslee/Gabbard on it.

6- Kamala Harris: Got taken down a notch, most strongly by Tulsi Gabbard’s blasting of her AG record in California. Did anyone but me notice Harris defend herself with a metaphor about how someone responds “under fire”? I took this as some sort of warning to Gabbard, who later did describe her military service as medical, not front line… Anyway, Harris didn’t distinguish herself or her positions from the others, but has such a clear command that she stays in the rankings.

7- Pete Buttigieg: Young Pete got a big plus from the Side for his early and frequent references to the need for action on climate. He remains vague on his positions and plans, and hints too much for my comfort at his conservative values.

8- Julian Castro: Julian gets big praise for repeating my argument against impeachment, and Slate even wrote him up for it. He stays on my list for that a few other moments of honesty.

9- Marianne Williamson: She’s principled, intelligent, right about many of her positions. She persuaded me to change my view on Slavery reparations. And she’s utterly crazy. Cool! She stays on my list, for sure, and I hope she stays on the debate stage.

10- Joe Biden: Slow Joe proved one thing in the debate. He isn’t dead. Yet. That seems to be enough to keep his campaign alive, too.

I can’t wait to see what the next episode of the Blue Clown Fashion Show brings.

A couple of links to close for today.

Yesterday I mentioned these wildfires in Siberia burning peat and permafrost in Siberia. Paul Beckwith, high priest of the Cult of Doomsday Scientists, digs into the results of fires in Siberia. CO2 releases are beginning that are out of human control.
https://www.youtube.com/watch?v=s4AczmNQByY

Remember the trouble in Sweet Paradise I wrote about a two days ago? Here’s a little more of the science behind the dying Spruce Trees.
https://www.chinookobserver.com/news/local/clone-war-aphids-droughts-killing-spruce/article_101da6da-7591-11e9-a509-13f7997d23e7.html

According to Politico, a majority of Democratic Representatives in the House now support impeachment. Nancy Pelosi is out of touch with her party. She is the dam in the river, the cork in the bottle. She’s in the fookin’ way, man. It’s time for the Dems to Vacate the Chair.
https://www.politico.com/story/2019/08/01/majority-house-democrats-support-impeachment-1440799

Democrats who support impeachment proceedings eclipsed the halfway mark — 118 out of 235 voting members — on Thursday, when Rep. Ted Deutch of Florida announced his support. Deutch was also the 23rd Democratic lawmaker to support impeachment proceedings in the week since former special counsel Robert Mueller testified to Congress, affirming publicly his damning evidence that Trump attempted to obstruct justice.

OMG!! It looks like loony-right-wingers are stealing my ideas, too. I was afraid that might happen. As a teacher of thinking and writing, I used to tell my students that I felt like someone passing out weapons to anyone who wanted them. I had no idea how they would use the tools of logic, rhetoric, and persuasion that I was putting in their hands. I could only hope that truth and goodness and all that wins in the end. What else can I do? If the Democrats don’t stop acting like Clowns, then they can’t blame me for calling them that. This very odd video of clips from the first night’s debate ends with an even odder, and very clownish, advertisement for Alex Jones and Infowars. Takes a clown to know one, I guess. Please don’t watch this video. I just dig their little clown logo thingy.

See you all tomorrow, from the Side.