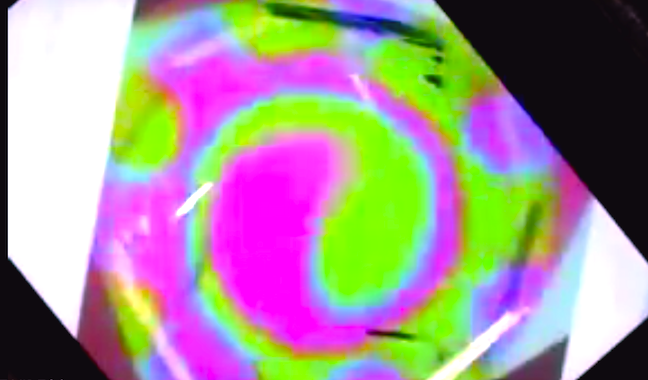 My friend Marc turned me on to this trick back in college. We lived together off-campus and both worked with video stuff in our classes. One day Marc showed me something you could do with the camera— though we had been specifically asked not to do this by the AV department when they loaned us the equipment. By focusing the camera on the screen of the same monitor it was being displayed on you could get the image to begin feeding back on itself. Globular loops of color and form would begin to move about the screen, as each shifting part of the image sought to keep up with its representation of itself. The patterns were psychedelic, ani-morphic, almost alive, it seemed. I was reading Gregory Bateson at the time and thinking a lot about feedback as one of, if not the basic element of life itself.

And Jimi Hendrix, of course, used feedback from his guitar to explore musical ideas not so different than these video patterns. Marc and I would smoke grass, listen to Hendrix, and watch our videos feed back on themselves until our minds were truly blown.

Feedback was cool, back then. At least, feedback under some sort of control.

Because, as cool as it is, the thing about feedback is that, by its nature, it tends to run out of control. That screech you hear when a microphone is turned up too loud is the best known example. Feedback loops, like any iterative systems, can quickly become exponential, and that leads to problems like the blown eardrums of rock and roll fans to go with their blown minds.

When it comes to understanding the climate crisis, feedback loops are a vital part of the picture. The living earth, like all living beings, maintains its homeostasis by a series of integrated and responsive feedback loops. The oxygen/CO2 cycle is a clear example of this. The decay of plants feeds CO2 into the atmosphere which is in turn absorbed by plants in an endless balancing act.

But the feedback loops within the earth’s system can sometimes go exponential and out of control, and that seems to be what is happening now with the climate. Two linked and climate-related feedback loops that I’ve learned about recently are the Arctic Albedo effect and the effect of wildfires in a warming permafrost region.

The Arctic Albedo effect is easy to understand. White snow and ice reflect sunlight, sending it back as light, not heat. Dark surfaces, like exposed rock and vegetation, like open sea-water, absorb light and convert its energy to heat. The difference in heat created by a light and dark surface is quite large.

That means that sunlight causes approximately 10 times more heating of dark surfaces than of snow and ice. The feedback loop, then, is clear. Heating of arctic regions leads to more bare, dark area, for longer periods of time. Those darker places absorb ten times more heat, leading to exponential feedback.

These out of control feedback loops can become far greater than their sources. According to this video by Paul Beckwith, the albedo effect from the loss of ocean ice in the Arctic region could add as much heat to the atmosphere as the last 25 years of human CO2 emissions. The nature of feedback is to amplify its source energy. A loss of albedo throughout the Arctic could have unfathomable consequences on the climate.
https://www.youtube.com/watch?v=yjA3y0K0Kxk

A second example of on-going feedback loops within the climate system comes in the form of fire. The current unprecedented wildfires raging in the Arctic regions from Alaska to Siberia, themselves caused by human-linked global warming, create a set of feedbacks which amplify the warming out of control. First, the fires add to the albedo effect by covering white snow and ice with dark ash, which then absorbs sunlight and contributes to further melting. Secondly, these wildfires contribute directly to CO2 in the atmosphere by burning not just living vegetation and trees, but also burning huge beds of buried peat and melting permafrost. Essentially, these fires are now putting as much CO2 into the atmosphere as human activity.

This is how abrupt climate disaster begins. Once feedback takes over, there may be no stopping it.

Again, here’s Paul Beckwith, high priest of the Cult of Doomsday Scientists, digging into the science of fires in Siberia and their possible effects on climate. CO2 releases are beginning that are out of human control.
https://www.youtube.com/watch?v=s4AczmNQByY

Here’s an overview of some of the important feedback loops of climate.
https://www.dw.com/en/when-nature-harms-itself-five-scary-climate-feedback-loops/a-43649814

It seems I spend a lot of time on this blog trying to convince folks that the climate crisis is an “existential threat” as so many now say.

So, how can something be “an existential threat”— which means a danger to our very existence— and not be the top priority of the president?
https://www.youtube.com/watch?v=iC-i3Nrs0RI

If climate change is an “existential threat” then what do we do about it? Washington Governor Jay Inslee’s Evergreen Plan offers some hope. Here it is as described by Vox.
https://www.vox.com/energy-and-environment/2019/7/30/20731958/jay-inslee-for-president-climate-change-justice-plan-green-new-deal

Of course, we can’t solve the climate crisis with the current Denier-in-Chief occupying the Oval Office. The Side always wants to keep impeachment in view.
https://www.newsweek.com/liberal-activist-groups-join-forces-pressure-house-democrats-impeachment-1452159

Evan Davis, writing for The Hill, thinks the impeachment process has begun!
https://thehill.com/opinion/white-house/455180-an-impeachment-inquiry-has-begun

And, just for the record, The Hill also notes this morning that July, just ended, was the hottest month ever recorded in human history.
https://thehill.com/policy/energy-environment/455924-july-was-earths-hottest-month-ever-recorded

On another side, I guess the government operates by feedback, too. Who out there thinks we need MORE surveillance?
https://www.theguardian.com/us-news/2019/aug/02/pentagon-balloons-surveillance-midwest

When you put the tools of tyranny into place, you are simply waiting for a tyrant to come along who will use them

Even this business group has noticed that something is wrong in the Two-Party Circus. What’s Wrong With It? Everything.
https://changetherules.org/

Over 50% of millennials are registering as unaffiliated voters.

Of course, when the morning comes, I’m always lookin’ for some feedback myself, folks, here on the Side. You can always send me some with the form below. I love hearing from you all.