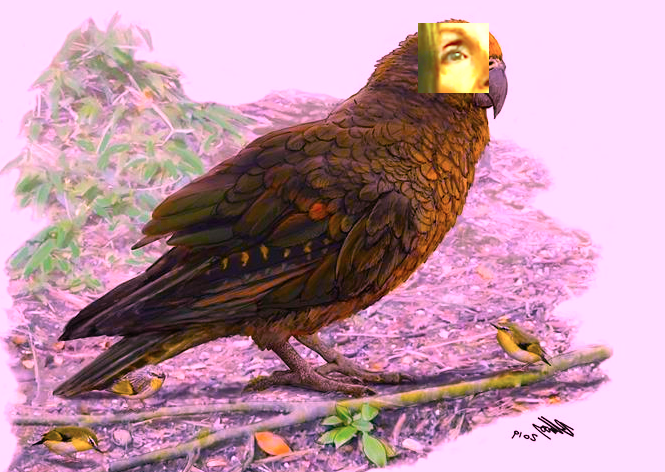 Well, there’s no way I can resist this. A “19 million-year-old cannibal parrot” the size of a kindergartner? Are you fookin’ kidding me? Who does that make you think of?

Remember the Pelosi Parakeet Parade? Remember when I called Nancy Pelosi Squawker of the House? Heck, remember when I even called her a kindergartner? Well, I need to apologize. I’m sorry, folks. It turns out I didn’t give her nearly enough credit. Even her guise as the Pelosiosaurus didn’t convey the real size and power of the mega-parrot she really is: Squawkzilla.

Now I see that Nancy Pelosi is the Squawkzilla of the House, a functionally extinct species, but still the top of the pecking order among the Blue Clown Parrots in Congress. When she gets her big beak chomping, the article tells us, she can break anything, including, it seems, the conscience of her Party.

For example, have you heard much from AOC since her little one-on-one with Pelosi? I think she learned some grown-up politics, and may have gotten a nip on the fingertip as well as an earful from Pelosi’s beak. This looks like one result of AOC’s little tete-a-tete with Squawkzilla. Don’t be “divisive” now. You know, it’s fun to say “divisive” with a Parrot squawk accent. Go ahead, I know you want to. “Polly wanna cracker. Divisive, Divisive.”
https://www.aol.com/article/news/2019/08/08/ocasio-cortez-rips-her-ex-chief-of-staff-for-divisive-tweet-about-fellow-dems-but-insists-he-left-her-office-on-good-terms/23790237/

And Jerry Nadler has clearly been squawked down from any little dreams he had of leading the impeachment charge. Sorry, Jerry, when Nancy squawks y’all gotta just parrot along. “Hold him accountable” “Divisive, Divisive.” Let’s hear it, now. Not too loud.
https://www.vox.com/2019/8/6/20751576/impeachment-inquiry-trump-nadler-democrats

Even though, as Common Dreams shares with us, “Impeachment is made for a president like Donald Trump.”
https://www.commondreams.org/views/2019/08/07/impeachment-designed-presidents-trump

Yes, nearly extinct Squawkzilla Pelosi is in the House, and she’s still kicking ass on the Blue Clowns of Congress. She’s leading a new Rust Party of Parrots, and she knows the path she’s on— the same old path that got us here. It’s her way or the highway, baby birds. ‘Cause when Squawkzilla squawks, you better follow along. Even if her path leads to extinction.

Because— and this is the thing, folks— the climate crisis means we can’t stay on the old path anymore. We gotta change. And we’d better get going. Our food production system is a big part of the problem, so agricultural reform might be a good place to start.
https://www.npr.org/sections/thesalt/2019/08/08/748416223/to-slow-global-warming-u-n-warns-agriculture-must-change