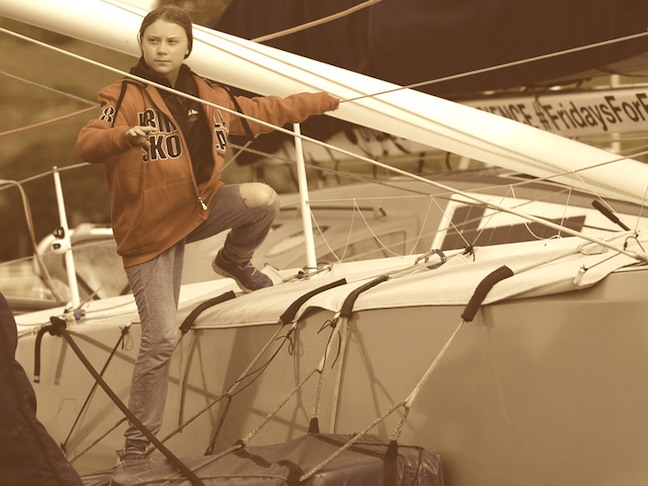 Greta has made it to America, and America is about to change.

Greta has made it to America, and I think that’s great. Welcome, young lady. I’m glad you’re here.

Greta has made it to America. There’s something ancient and heroic in her arrival by sailing boat, riding the prow with wind blowing back her hair as she sweeps into harbor. Cool, right? The stuff of legends. The stuff of myth. The fearless girl crossing the seas. The Viking Princess arrives in the New World. The young heroine with vision and bravery and a genuinely weird and groovy presence that can’t be denied by anyone who actually watches her talk. On an actual mission to save the world. And on a fookin’ sailboat, no less!

I just love Greta Thunberg, and I’m swollen for a moment with a rush of hopium, an almost prophetic feeling that this little girl will trigger real change in America. I watched her do it last year in Europe, and I know that the time is ripe in this country. Climate change you might say, is in the air. This is the moment we’ve been waiting for, right? Remember when I practically begged Greta to come to America?

I’m overjoyed that she’s here, and hopeful for change. But I’m a seasoned hopium addict, and I’ve learned to be cautious of that optimistic rush and the sense of surety that it brings. My stupid grin is being dampened a little by dang Cassandra here, who is busy weeping like a baby again. She does this shite all the time. And that usually means she is seeing a bit of the future that she doesn’t like. I notice Cassandra doesn’t even bother to tell me certain things anymore, though I always get the feeling she knows more than she lets on. She’s a bit like Z-anon-Sensei in that way.

What she does say, I honestly sometimes can’t understand. I think she just said “Greta is going to meet with Joan Baez, it’s fate”. Or something like that, anyway. I’m not quite sure, but, if so, who cares, right? I mean, that would be cool, and maybe Joan will write a good song about it. But is it worth getting all weepy about? Fook if I know why. Cassie may know what she means, but I sure as heck don’t.

And that’s the problem with prophecy.

The problem with prophecy is that you don’t want to encourage bad things to happen by predicting them, even though your predictions show that bad things are gonna happen anyway. If Cassandra tells everybody something bad is coming, does that make it more likely? That’s the problem with prophecy, and that’s why Cassandra is quietly weeping all the time. Sometimes she’s not so quiet, actually. Like right now.

So, at least for this morning on the Side, let’s only predict the good things, and leave any bad intuitions and tears for later.

Greta has made it to America. And America is gonna change. Greta’s gonna be on TV. And many, many millions of Americans are about to wake up to the emergency of the environmental crisis. The kids in American schools are going to go on strike this fall, and everyone is going to notice. A lot of adults are going to support them and join them. The Climate Movement has come to America.

And we are going to start hearing about Extinction Rebellion in the mainstream media for the first time. These are all good things….

And, like Cassandra says, in the final end, when the fire and the rose are one, everything will be just fine, fine, fine. That’s always good to know, too.

That’s as far as I can go with the good parts of Greta’s visit right now. Cassandra won’t tell me much about what comes in between.

But, still, as the rush of the hopium wears off, I begin to feel like weeping a little, just like Cassandra over there.

But I won’t. Because Greta has made it to America, and I’m glad she’s here.

Greetings, Greta, and welcome! From the Side.

What! You don’t know who Greta Thunberg is? Jeez-loo-fookin’-Wheeze!!

Watch this, and check in with me if you don’t feel better– when the morning comes.