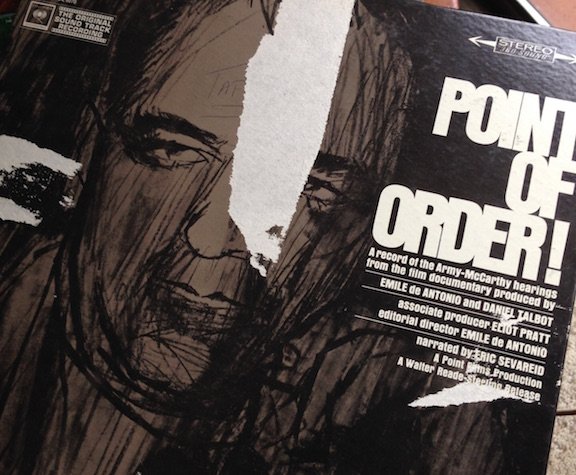 Here’s something you probably wouldn’t guess about me. When I was a kid my parents used to listen occasionally to a record they had, (you know, those things that spun around on a turntable) an LP (though it wasn’t really called that then, in the early 60s) an album, then, of highlights from the McCarthy Congressional hearings. That’s right, a record album LP thing of a Congressional Hearing. The album was called Point of Order. It captured the endpoint of McCarthy mania, and was highlighted by a key moment where a Congressman calls out “point of order, point of order.” I know it’s sort of geeky, but my folks loved that record, and I had no idea why, though I heard it many times. I don’t even remember it that well. But what I do remember is the look my parents got on their faces, the closeness between them as they listened, and a feeling that there was something they clearly hoped I would understand from what we were hearing.

I think, now, at an age so much older than they were then, I do understand what they hoped I would. At least I think I know why they loved it. It recorded a moment in history when hope prevailed, when America changed for the better, a time when common sense and truth stood up to a demagogue and brought him down. It marked the point when a dangerous movement— a fascist, authoritarian movement— was defeated by a better vision of the world. And a moment in history when democracy and the American system worked.

My parents were John Kennedy fans; they believed in a vision of a ‘city on the hill’ type of America, a sort of Camelot— a more just, more equal, more democratic, and more free world. That 40 minute piece of Congressional theater recorded on lo-fi mono must have carried them back to the birth point of their dream, their hope, their belief that good could prevail. A moment in our country when the good side won.

Of course the dream of some fantasy Camelot my parents imagined did not come true. My father lost much of his own idealism by the time the Vietnam War ended. The ‘great society’ gave way to something else, and my parents changed with it. I doubt they listened to that record much, as time went on.

But I have remembered it ever since those long ago childhood evenings. And watching this impeachment trial— admittedly the highest Congressional theater of all— I can imagine a time when a young couple somewhere in America —with their own children listening without quite understanding— watch old recordings of this trial, this moment in history, listen to Adam Schiff speaking out for truth, for right, for democracy, and glow with the same kind of hope my parents did. I can picture them looking at this moment in history as a time when truth and common sense and democracy rose above a demagogue, above partisanship, above hate and toward that better society that Kennedy, and my folks, and I, believed in.

Only time, and history, will tell if we are lost.

We’ll find out when the morning comes.