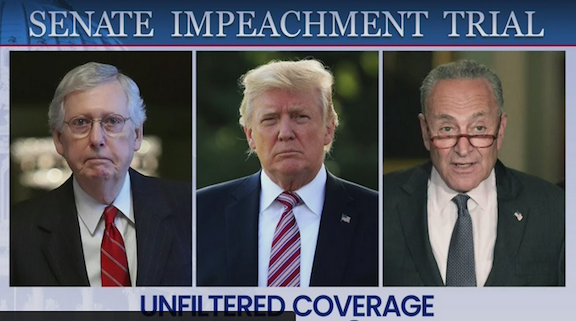 Looks like we are getting a short day, today, folks. What a relief– for anyone trying to defend the Criminal in Chief. The Trump Impeachment Defense act just doesn’t actually have a defense, and today they’re gonna prove it! A couple of hours to wind up what they didn’t do yesterday. Should be fun. (Remember how people used to say, “Not!” after statements like that? I sort of miss that. Not!) And I’ll be here, posting my random observations, thoughts, and odd musings that don’t quite reach the threshold of thought. Pitch in with comments using the form at the bottom of the page if you want.

*** here are a couple links to get set up for today’s session.

interview with Dem senators including Wyden. “it’s not a transcript!”
https://www.youtube.com/watch?v=srpwqf2MWAw

***Today’s opening prayer focused on strength. “Strong as lions” he said. Nothing about truth, like he did yesterday. Good thing, because he-e-ere’s Philbin.

***Philbin: Comes back to “maladministration” as a purpose of impeachment. “limits and checks on power” “separation of powers”… yeah, that’s what this case is about, “arbitrary power”, too, are descriptions of Trump. I mean, sure, he is guilty of maladministration, too, but that’s not really what’s at stake here. Patty’s sure taking a while to say the same thing over and over again.

He’s working a version of the, “you can’t know Trump’s mind defense”, which I get. I mean, if there’s a mind there, it’s sure hard to know what’s in there. Like seeing inside a quantum particle or something… But like Elizabeth Warren said yesterday, law is based on intent. So this is a non-legal, legal-sounding argument. “The constitutional puzzle…” ??? Say what?

He moves on to the second point, without making the first. Then he makes the same point, “motive is inherently…” hard to understand. Then he says, Trump’s “perfectly lawful actions” I’m having trouble just jotting down the lies as fast as they pass by. “He alone is an entire branch of government,” OMFG I’m shaking in my boots. “Within the constraints of spending laws.” I literally can’t keep up with the lies. He says opposing a dictatorial president is un-democratic. Are you fookin’ kiddin’ me. America has no king. Repeat after me. America has no king!

Philbin continues- Hey, cover-ups are fair because sometimes things leak. Trump was especially worried about a “perfect” call getting leaked. That would obviously be terrible, because… This is so weird. He says that hiding something isn’t hiding it. He says a lie from the OLC in hiding the complaint isn’t a lie. He says urgent isn’t urgent. What kind of argument is this? I see where he’s going. Wait, the law says “funding of intelligence activity,” which were surely part of the aid package. And the “intelligence server” is also part of the intelligence community. But I don’t have the background to directly argue the OLC. As a layman, though, it’s still a cover-up, if with a technical legal out for the OLC and Trump office. Philbin is sort of implying a “campaign finance law” violation did occur. Barely legal isn’t the same thing as “correct”.

*** Sekulow “Danger, Will Robinson!” … Poor, poor, pitiful me. James Comey! Steele Dossier! FISA warrents! Finger-pointing. Table-hammering. Poor, poor pitiful me. Then he asks us to put ourselves into Trump’s mind. Didn’t the previous dude say you couldn’t do that? I’m confused, but I’m used to it. Why does it feel like he’s going to bring up Hillary Clinton? He is real mad about FISA, about Comey. Um, what about the trial? What about the accusations against Trump?

Oh, good he’s going to lie about the Mueller report now. I personally would like to bring the Mueller report into this impeachment, because of the detail with which it describes Trump’s pattern of criminal behavior. But what does that have to do with this trial, exactly?

I went and checked. My copy of the Constitution doesn’t have a “during election year any crimes are fine, Presidents get out of jail free” clause. I looked and looked. Maybe I could glance at Sekulow’s copy? You know, Jay, when I put myself in Trump’s shoes I find it difficult to not talk like a mobster and put kids in cages and break any law that stands in my way. It’s an interesting feeling, but I don’t like it. I’m not gonna do that again. And I feel like I need to wash my feet.

*** More Sekulow. ”I’m not going to go through a detail by detail analysis of the facts.” Quote, Unquote. “The facts are important, though.” Ya think?

He’s clear there was no quid pro quo. But, if there was, it doesn’t matter! What a relief, for the Criminal in Chief. I like that he quotes like an authority one of the members of his own team. He’s actually re-reading us Dershowitz’ words from last night back to us. He’s quoting exactly and he’s gonna repeat it. That’s a weird source to use. Again, Dershowitz’ whose views on lying for one’s client being acceptable are well known. Now he, once again, is using the defendant’s denial as evidence in the defendant’s trial. That may rhyme but the logic sucks.

Hey, he said, “Danger, danger” Will Robinson again. He must be almost done. Better quote Dershy one more time before he gives up the ghost.

Nope, he has to spew utter nonsense for a while. Words fail. Finger-pointing, table-pounding again. This isn’t helping, Dude. Sit down.

*** Now there’s an idea. Maybe we need a “high court of corruption” too. Sekulow’s right about one thing, if Senate acquits we’ll be right back here again. It’s very difficult to follow what he’s talking about. He’s jumping from point to point to point. He mentions Bolton again, and asks if the Senators will base their decision on a news story about a manuscript. Good point, there, emphasizing the vital need to talk to Bolton.

“A pause button…” weird. “We’d like to know what they are doing with it…” ??? Um, read the transcript. What Ukraine was doing with the military aid wasn’t mentioned. Only investigations that would help Trump. I hate to say it, but I’ve heard people high on cocaine talk in this sort of jumbley, excitable way. Not an accusation, Jay, not exactly a question, either.

Sekulow has a career of defending the constitution (not! dang, once you start doing that it’s hard to stop.) Executive privilege isn’t “nonsense”. But saying that every single person and document is covered by it is nonsense.

Okay, back to danger Will Robinson. Does that mean he’s done? Not yet… He brings up the Javelins, that Trump was using to bribe Zelansky in the phone call (“do us a favor, though…). Not helpful. “Policy differences” will definitely be a talking point phrase we’ll hear a lot. Sekulow doesn’t even bother to give it a verb. Any one who repeats that phrase, with or without a verb, is a co-conspirator with Trump and his gang.

***Cippolone— Ending with montage of Democrats speaking against Clinton impeachment. I don’t know how this works. The logical term is “false equivalency”. Another way to understand this argument is the Republicans are using their own previous malfeasance, in impeaching Clinton for questionable at best reasons, as a defense for Trump’s clearly impeachable actions. The Republicans’ previous “lowering the bar” for impeachment has little real bearing on the nature of this trial, these accusations, these crimes. This trial requires evidence in terms of documents and witnesses, if that impeachment bar can even be measured.

Cippolone says, it will rise above partisanship to acquit now, without evidence. Going with your party against the truth is no way to end partisanship.

Well, that was a terrible defense. Looking as impartially as possible for someone who has called for Trump’s impeachment for a year, I would say that it is clear that more evidence and more witnesses would be helpful in being sure that his obvious guilt in this case rises to the compelling level required to remove a sitting president. Lots of documents. Lots of witnesses. Let’s have a real trial now.

What do you all think? And what questions would you like the Senators to ask?