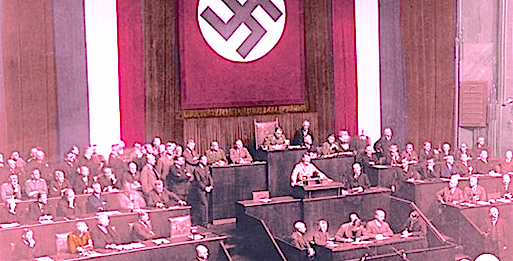 Today is the day, folks. Democracy lives or dies. Tune in, and follow along with me here, if you want. I will be here on the Side, once again live-blogging the apocalypse, with whatever courage I can continue to muster. With love and hope for the future, because the morning has come…

***Key story lines today: Will Justice Roberts save the nation, or sit on his thumb while the Republic burns? How many real Red Republicans remain, among the swarm of Orange Trumpian Cultists? What will the people of the United States do about it? We’ll find out soon. Here we go…

***If there are no witnesses, then the odds of a second impeachment go up immensely. And Adam Schiff will likely subpoena John Bolton tomorrow. If there are any Republicans left, they should realize this, and go ahead and allow witnesses now, rather than go through all this again later.

*** If the Senate votes against witnesses, they will have proven Justice Roberts wrong, when he claimed they were “the world’s greatest deliberative body.” Maybe he will be insulted enough to act.

***Even as the trial goes on, the cover-up continues.
https://www.vice.com/en_us/article/y3mwey/boltons-lawyer-says-trumps-claim-of-classified-info-in-book-is-a-bunch-of-bs

*** Here comes the prayer. Chaplain mentions ethics… then quotes the Trumpians “do for others…” “can’t ignore you and get away with it” “reap what they sow.” “nation and world know…” “in the name of Jesus.” Sweet Jesus, I did not like that prayer.

Schiff starts with the new news from Bolton. Which implicates Chippy Cipollone himself. Holy reveal, Batman! “The facts will come out.” He basically reads the NYT article, practically reading Bolton’s book to the Senate and anybody who’s tuning in. “Let’s find out.” Yeah!
https://www.nydailynews.com/news/politics/ny-pat-cipollone-trump-bolton-impeachment-20200131-ehyu7icefnb7xcowcnwleivfza-story.html

*** I doubt anyone reading these words has any truck for the President or his defense. I doubt that anyone reading these words thinks Trump is innocent, or doesn’t deserve removal. I doubt that anyone reading these words doesn’t think a trial needs witnesses. But if, by some weird chance, you don’t believe those things, please watch the first hour of this testimony. The depth of evidence, the questions that witnesses could answer, the complexity, length of the Ukraine scheme, its direct management from Trump, and its danger to our nation are laid out in a simple way. If you aren’t at least troubled by this presentation and still support Trump without question, if you think trials can be real with no witnesses, then there’s just no help for you. Sorry about that.

*** The “I don’t think it’s the Senate’s job to find out the truth” defense is lazy. It’s a whiny, self-centered excuse, a babyish, playground way of thinking about the most important task of the US Senate. It says the job of the Senate is to judge the House’s investigation, rather than to discover the truth of the charges. And, of course, it’s an acknowledged violation of the oath they took at the start of the trial.

***Feels a bit like watching a dictatorship being established, in real time, while almost everybody just goes about their daily business. Weird. I bet that’s what it felt like in Germany, early 30s, radio blaring some nonsense about the government from a doorway, as you walk home in the rain…

***I won’t even waste insults on the Trump pack of liars today.

And with that, a partisan vote of 51-49, Democracy in America Ends.

*** News coming in right now. a delay in the trial schedule… No hurry, really, now that democracy is dead, — that corpse is done kicking, might as well leave the body lying in state for a couple days– nothing over the weekend, a Super Bowl party, Monday for closing arguments, Tuesday a day off for Chief in-Justice Roberts, then the final cheat-I-mean-vote on Wednesday.

Unless something changes when the morning comes.